Ever since the disappearance of flight MH370, Malaysia has come under intense flak and have been accused of not being forthcoming nor transparent with information related to the search for and investigation into the flight.

As we all know, the disappearance of the 370 is unprecedented. In past incidents, demands flow when planes are hijacked; debris is found at crash sites. In this incident, we still don’t know how flight MH370 ended, and we can only guess where the plane might be. A coalition of nations is now searching for the airplane, and numerous false alarms have emitted from the search teams, but somehow Malaysia foots the blame for all that.

We cannot be filling in the information gap with fantasies that would lead to even worse form of speculation, but somehow the media, a foreign one in particular, is not contented with what has been presented to them thus far. This particular media even compared the lack of flow of information in the 370’s case with that of the Asiana crash at the San Francisco airport (SFO). Whether or not ethical reporting or common sense are present in that organisation, you cannot compare the 370 to the Asiana crash. Of course information was in abundance in the latter but it is only because it crashed at the airport. In the 370’s, we do not even know where it went down, let alone how! However, it would be futile to argue about ethics with a media organisation that could even fill in the information gap with absurd theories such as the Black Hole and the existence of another Bermuda Triangle.

The hunger for ratings and sensational news gets the best of this organisation. A month after the disappearance, it ran a story to suggest that the Royal Malaysian Air Force (RMAF) had scrambled fighters at 8am on 8th March 2014 to search for the missing airplane. I did a quick check with friends in the RMAF and they denied that fighters were scrambled. This is reinforced by categorical official denials by the Minister of Defence as well as by the RMAF itself.

This media then even suggested that the 370 flew at 4,000 feet to evade military radar near Pulau Perak only to re-appear 120 nautical miles away heading north-northwest. I hope that this media organisation realise that the USAF has spent trillions of US Dollars to acquire stealth aircraft such as the B-2, F-117 and the F-22. If a Boeing 777 could evade from military radar then the USAF was suckered into spending so much when they could have had a much cheaper solution in the 777.

Every time there is a press conference, although the information given, if at all available, is always about the search and rescue effort. However, all the questions posed by journos are about finding out who is to be blamed for the 370’s disappearance. More than twice that I have heard a journalist asking the CEO of Malaysia Airlines, Ahmad Jauhari Yahya, if he would resign. Had the journalists done their homework, Pierre-Henri Gourgeon only left Air France in 2011, two years after the Flight 447 tragedy, and only because of the merger between Air France and KLM.

In other incidents, airlines capped the duration of assistance rendered to the families affected by an aircrash to only one week. This has been more than a month yet MAS is still supporting the families. I am disgusted with people who are so thankless towards MAS despite the fact.

The media should know better that this plane is still missing and not a lot is known about it. As such, information may be scarce and not free-flowing. If there is nothing to be reported, then don’t report or speculate. You won’t do justice to the passenger, crew and their family members. There are other pressing issues that could be covered such as Crimea, the Rohingyas. Running down a country just because it hasn’t given you the information needed to increase your ratings certainly shows your immaturity and malicious intent.

If you think it is disgusting that armed men believed to be from the terrorist group Abu Sayyaf could infiltrate our borders of the east coast of Sabah last November, shoot dead a tourist from Taiwan and kidnapped his wife, then again a few days ago taking a tourist from China and a resort worker away, guess what is even more disgusting? That the man above, the Deputy Minister of Home Affairs, had the cheek to say the following (as quoted by The Star: 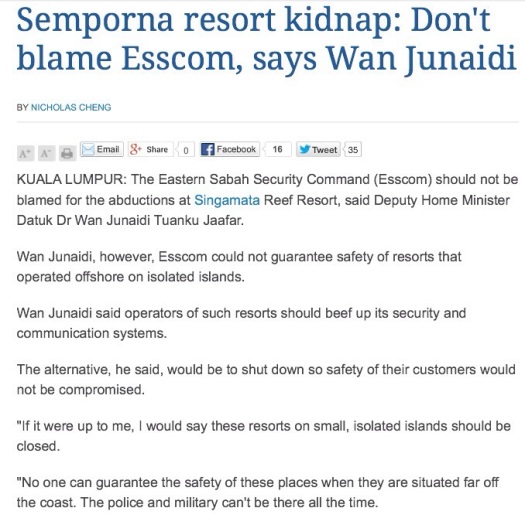 Who are we to blame then, Wan Junaidi?

May I remind the Deputy Minister that ESSCOM was created on 7th March 2013 to ensure the security of the ESSZONE is taken care of in a holistic manner so there would be no recurrence of the Lahad Datu incursion and of other similar incidents. Maybe I can provide the Deputy Minister with a statement by the Prime Minister on Police Day 2013 that was posted on ESSCOM’s website. 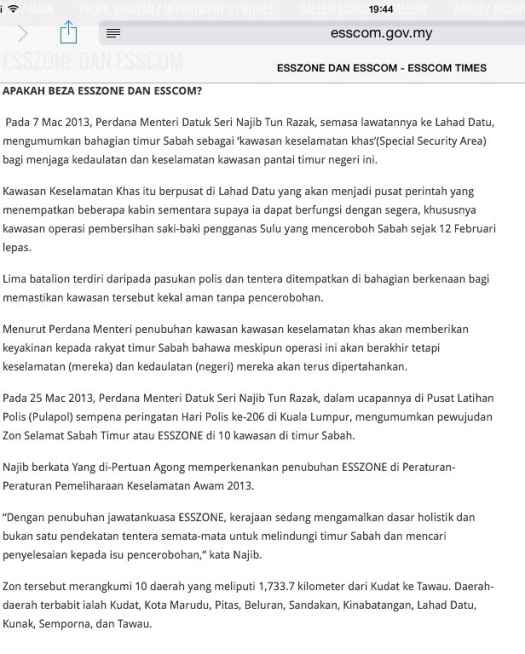 ESSCOM is an agency under the Prime Minister’s Department to undertake the enhancement of security in the ESSZONE defined as 10 districts from Kudat to Tawau spanning 1,733.7 kilometers, to prevent recurrence of any form of intrusion by unwanted foreign elements.  The method that should be employed to affect this is by applying the Defence-in-Depth concept that I wrote about in March of 2013 when ESSCOM was first formed.  The military has worked with the police in a support role on numerous occasions starting with the First and Second Emergencies of 1948-1960 and 1968-1989 periods respectively, in various UN missions such as to Cambodia, Liberia, and Timor Leste. The military also supported the operations conducted by the police in Ops Daulat last year, and since then the military and police have conducted basic recruit training jointly at the Army Recruit Training Centre in Port Dickson to enhance better understanding between the two.  Therefore, the issue of one not being able to accept orders by the other does not arise.  In any case in peacetime, the command of the police prevails and the military plays a supporting role, and this has always been case.  The Immigration however, does not have any experience in operational security as they only act as filters to immigration, and not experienced nor trained in deploying combat assets.  It is no secret that the southern Filipinos have no respect nor fear for our Immigration Department. They only fear our police and the military.

I don’t subscribe to Wan Junaidi’s remark that the resorts should close down. They have been in existence even before the formation of ESSCOM. They are still located within our littoral zones. Should they not be protected? Should there not be security forces stationed at these resorts as there is on Mataking, Mabul, Sipadan, SiAmil and other islands?  If the resort owners do not cooperate, what is the problem? Who makes the policies? Can’t action be taken against resort owners who do not respect policies? Stop giving stupid excuses, Wan Junaidi, and start behaving like a Deputy Minister.  If ESSCOM cannot even get the buy-in because it does not have the will to enforce and execute policies, it should be disbanded and leave it to the police and military to run an enhanced version of Ops PASIR. The Immigration Department should just go back to stamping passports and weed out illegal immigrants.