When you spend your Hari Raya, don’t forget that a year ago tomorrow 298 souls including 43 of our brethren were on board the Malaysia Airlines flight MH17 from Amsterdam bound for KL. The 43 also included fathers, mothers, sister, brothers, grandmothers, sons, daughters, grandchildren who were looking forward to spending Aidil Fitri with their loved ones.

Alas, God loves them more. They never made it home alive. The flight was brought down, as I have  maintained from the fateful day itself, by a BUK surface-to-air missile.

Many a days were spent on trying to bring them back home and to retrieve the Black Boxes through normal channels but none of the channels worked. Not even the powerful western powers nor members of NATO could do anything while the 298 lie on the hard ground near Donetsk, Ukraine.

Lest we forget the man who spent sleepless nights trying to secure the bodies of the 298 as well as the Black Boxes using unorthodox methods: 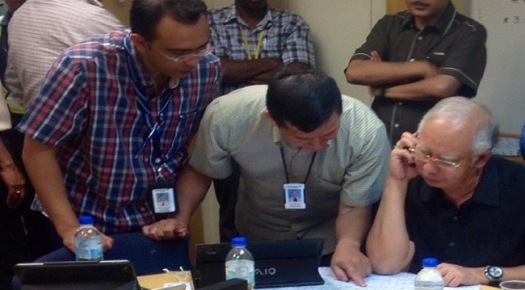 YAB PM Najib Razak :-
16 July 2015
“It was a year ago, on 17 July 2014, that MH17 was shot down over Ukraine. We will never forget the 298 lives that were lost that day, including 43 of our fellow citizens. They were fathers and mothers, brothers and sisters, sons and daughters… Some were students travelling abroad to continue their education. Others were returning after a holiday spent with their families. All were innocent. All were taken from us far too early.
It is hard to capture words to describe the shock and disbelief I felt on being told that there had been another Malaysian airplane tragedy, coming so soon after MH370 – which we were still in the process of mourning. Any sentiments I felt on a personal level had to be placed to the side, as we sought to comfort the families of those on board.

At that time, our foremost priority was ensuring the swift return of the bodies of those onboard to their families. It was crucial that this be done in a dignified manner that allowed the families to grieve properly.
The situation was complicated by the fact that the plane had been shot down over territory that was in the throes of a civil war, and controlled by non-government forces. Engaging with them was necessary in order to ensure the swift return of the bodies.

In those early days, we encountered criticism from various quarters, with segments of the foreign media calling on us to follow standard modus operandi. However, extraordinary circumstances require extraordinary measures, and we ignored those disruptive noises – standing our ground and doing it our way.

We cast aside standard protocol and, within days, had sent representatives from the National Security Council to meet the rebels and negotiate for a safe passage, ensure the return of the passengers’ remains, as well as access to the wreckage and flight recorders that would help us get to the truth of what happened on that fateful day.

Ultimately, Malaysia’s strong stance and decisive but consultative and unorthodox approach got the job done.

A year on, the battle for truth and justice is far from over, and we continue to provide our full cooperation to – and work closely with – the Joint Investigation Team (JIT) looking into this tragedy. They now have a clearer picture regarding the possible cause of the tragedy, and are expected to continue their investigation into all possible scenarios until the end of 2015.
The end goal is clear – to bring the perpetrators to justice, and ensure they pay for this unforgivable crime, which claimed hundreds of innocent lives.

By early October this year, Insya-Allah, the report by the Dutch Safety Board will be published. At the same time, we will continue to push for the establishment of a full, thorough and independent international tribunal into the incident – for the sake of the families and friends of those who perished in the tragedy.
The victims of MH17 were casualties of a conflict that was not theirs.
To their loved ones – There are no words I can offer to ease your pain, but know that your pain and sorrow are shared amongst all of us. Malaysia wept for your loss, which was our loss too, and we will never let those who died be forgotten. Take comfort in knowing that MH17 brought the country together in an act of unity that would make anyone proud to call themselves Malaysians. May that unity be the legacy of those we lost.
I remember vividly the shock and anger I felt upon receiving that phone call, and the experience of leading our country through the tragedies of MH370 and MH17, in the space of mere months, are still fresh in my mind. I hope that neither our nation, nor any other nation, has to endure such tragedies again.

Above all, I pray for the families of those who perished to stay strong in these trying times. Remember that all of Malaysia stands in unity beside you, and we will continue to stand beside you – for as long as it takes – as we work tirelessly in search of truth and justice for your loved ones
Al-Fatihah”

Selamat Hari Raya to all my blog readers and Al-Fatihah for those who were on board the MH17.

One after another tragedy befell us. 2014 struck us as annus horribilis. Our faith in the capability of this nation was tested again and again, and at times for many it seemed as if we are the laughing stock of the world.

One man surprised me: Najib Razak. I for one did not think that he would be able to keep his head above the turbid waters created by the MH17 incident where world powers and their allies were already showing fists to each other, while Malaysia looked helpless in the middle. Out of nowhere, Najib appeared on television screens almost worldwide, announcing that Malaysia had secured the two black boxes, the bodies retrieved, and unlimited access to the crash sites. And it seemed for a long second, everyone in the world paused and wondered how could this nothing nation secure such a deal?

I have always maintained that if the parties involved in the conflict are eager to prove their innocence, they should cooperate. That was exactly what Alexander Borodai did. Malaysia did not care for the conflict. All Malaysia want is to be able to send back fathers, mothers, grandfathers, grandmothers, sons and daughters back to their loved ones; therefore it was important for Malaysia to speak to who seems to be in-charge of the area and situation, not necessarily recognising who is who in Eastern Ukraine.

A simple but decisive stroke of diplomacy by the least expected nation’s Prime Minister has brought about all but a final closure to the MH17 episode. Najib Razak, in my eyes, has proven himself a worthy leader, a diplomat to be respected. As for MH370, search will recommence next month earliest, and we hope to have good news from that as well although it may seem all but futile.

At least, in the case of MH17, Malaysians can have a great albeit sombre Aidil Fitri. At least we know they will be coming back. And we pray the same for those on board the MH370.

Dato’ Seri Najib, I thank you and seek your forgiveness for not having faith in your handling of the MH17 tragedy. Not only have you proven that I was wrong about you, you went on to prove you are far better than the leaders of the developed nations.