IN light of the difficulties in obtaining manpower by employers in this pandemic era, the government has announced a programme to recalibrate undocumented immigrants in order to make them legal for employment.

This was announced by the Home Minister Datuk Seri Hamzah Zainuddin at his Ministry yesterday, after a meeting with the Minister for Human Resources Datuk Seri M Saravanan.

The recalibration programme that will be implemented from Nov 16 2020 through June 30 2021, will consist of two components; one which allows undocumented immigrants to register themselves to be employed in the four 3-D (Dirty, Dangerous and Difficult) sectors namely construction, manufacturing, plantation and agriculture, while the other allows them to return to their respective countries.

When asked about the difference compared to the previous amnesty programmes Hamzah stressed that this programme does not involve third-party vendors.

“All undocumented immigrants in this country who wish to participate in either component must register themselves directly with the Peninsular Malaysia’s Department of Human Resources. If they and their employers meet the pre-requisites, then they will be allowed to work,” he explained.

The government expects to collect RM90 million from compounds and fines through this recalibration programme.

Only undocumented immigrants from the 15 countries listed as allowed to be employed, who are already in Malaysia may participate in this programme.

There are about 20,000 undocumented immigrants being held at the immigration detention centres.

This move would definitely help the industries mentioned above.  Early July,  Malaysian Employers Federation Executive Director Datuk Shamsuddin Bardan said the plantation sector might lose RM142 billion in their operations this year due to a shortage of workers, while shortage of workers in the agriculture sector would lead to an increase in the price of vegetables.

Although both the Home Affairs and Human Resources Ministries have said that employers interested in the recalibration programme will have to abide by a certain ratio of foreign versus local worker limit that is to be set, it is interesting to see how many Malaysians would actually be interested in the 3-D jobs.

When the Selayang wholesale market faced a shortage of foreign workers a few months ago due to the area coming under the Enhanced Controlled Movement Order, there was a lukewarm response by Malaysians to fill in the vacancies.

Datuk Shamsuddin explained that this was not just about the wages offered.

Although Malaysians earn double that of their foreign counterparts, the former are not used to working in such environments.

“Locals are not keen on staying long in these kinds of jobs.  They need to be brave and strengthen their attitude towards working less favourable jobs and should treat all jobs with respect.”

His main worry is that once the economy improves, the Malaysians would not want to stay in those 3-D sectors.  Therefore, Malaysia will always have that reliance on foreign workers.

Malaysians are, of course, sceptical about any such programme.  Previous amnesty programmes, especially those run by third-party vendors have always been open to abuse.

Despite having the 6P amnesty programme in 2011, the number of immigrants, both legal and undocumented, increased by 1.013 million between 2010 and 2019.

To allay this fear, Hamzah said that the wages that are to be paid to the legalised immigrants under this recalibration scheme will only be done electronically (e-Wages).

“When there is no money being deposited by the employer, then we will know that they are no longer being employed.  It would be easier for us to track them down.”

Any employer caught employing an undocumented immigrant after June 30 2021 will be fined RM50,000 or a jail term of up to 12 months per worker. If they are caught with five or more undocumented worker, the penalty shall include whipping.

(This article first appeared on The Mole )

Imagine not long after QZ8501 went down an airline advertisement reads:

“Our planes land at airports, not at sea.”

“Our planes may be older but they are safer.”

But the above never happened. Imagine if it was another airline that had gone down. Guess who would be quick to make fun of the situation?

It happened when Malaysia Airlines Flight 370 went missing in the Southern Indian Ocean. The Air Asia in-flight magazine came up with an extremely distasteful article: 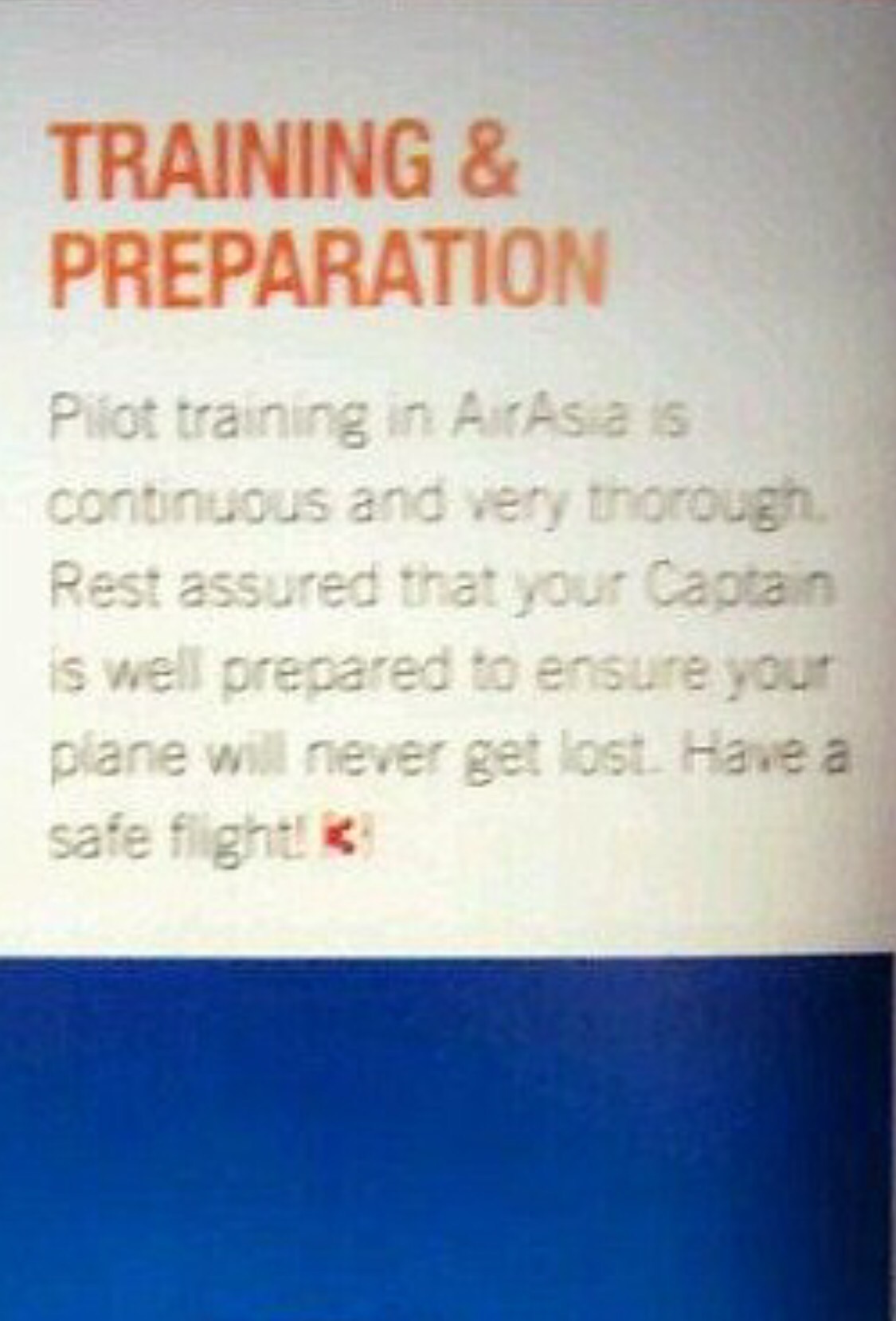 But of course, Air Asia is the fun airline. Everything is about having fun and making fun.

Its latest victim is Malindo Air – after Malay Mail Online reported that cabin crew candidates were asked to strip.

Malindo Air has since denied the allegation.

According to a statement carried by The Star, the airline said each applicant was briefed for her consent on the process before the checks were carried out.

“Grooming checks for visible marks are conducted privately by female supervisors in a professional manner and is part of the interview process,” it said.

“Herein candidates are briefed ahead and consent from each candidate is required prior to proceeding to ensure that no prominent marks will be visible while wearing the uniform,” it said.

How different are the uniforms?

Malindo Air cabin crew wear a finer white kebaya top. If you have ugly scars or tattoos, they would show up easier than if you are wearing the uniforms of Malaysia Airlines and Air Asia.

As expected, Air Asia was quick to take a CHEAP shot at Malindo Air’s unfortunate episode: 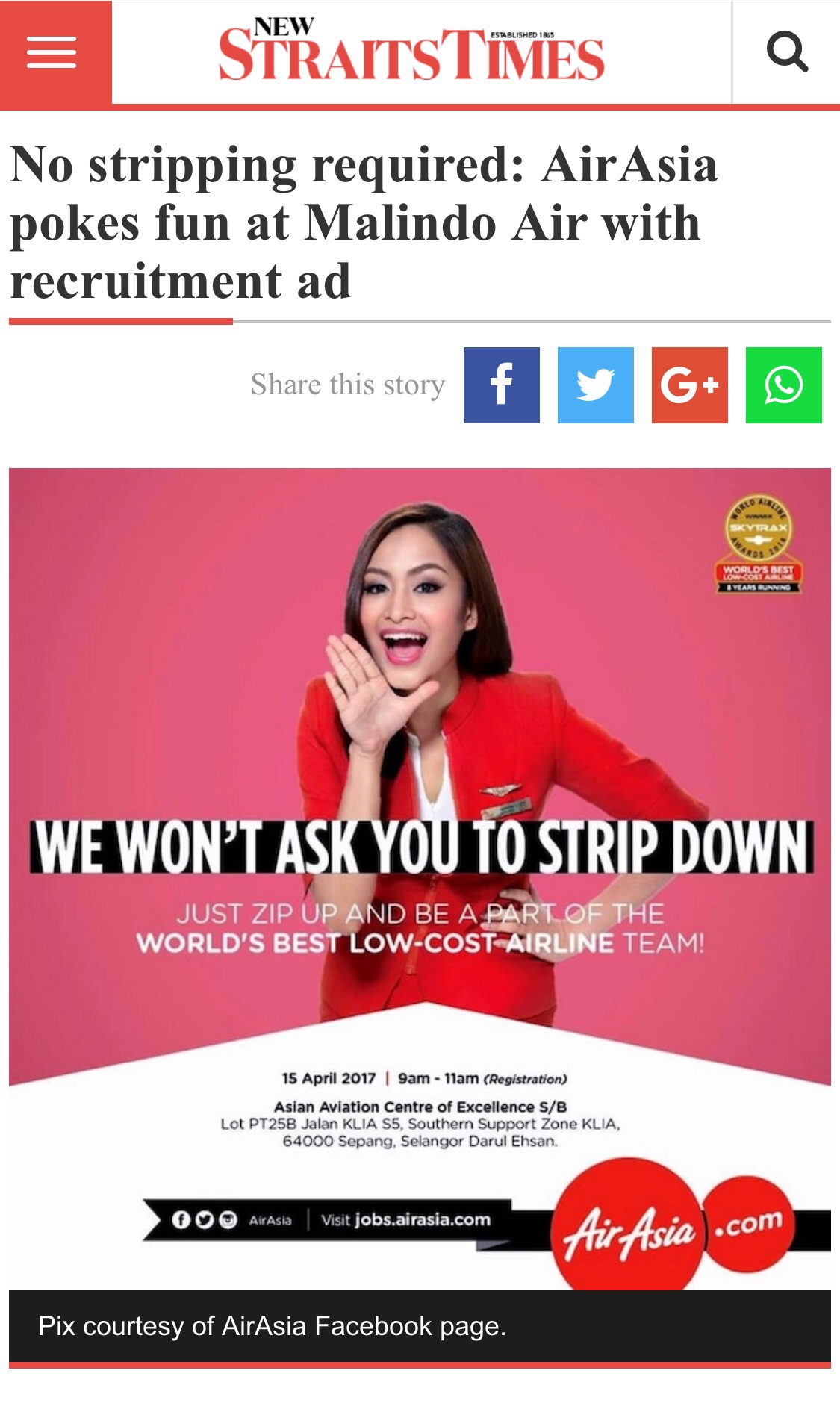 It may all seem funny to Air Asia and ridiculous to many, but how does Malindo Air’s policy on body marks fare compared to other airlines?

Perhaps like Malaysia Airlines, Singapore Airlines and Air Asia, tattoos that can be covered by the uniform are acceptable. No visible tattoos are allowed.

Emirates has a similar policy. Tattoos that are visible while wearing their uniform are not allowed. The tattoos cannot be covered by cosmetics or bandages.

Etihad Airways has the same policy as Emirates’s. You cannot have tattoos that are visible while wearing their uniform and no covering using cosmetics or bandages are allowed.

If you look at the uniform you would think that Qatar Airways has the same policy as the ones adopted by the airlines mentioned above.

Qatar Airways does not allow tattoos no matter where they are located – PERIOD. The airline did not hesitate to make redundant senior employees when the policy was introduced.

How do you think did the interviewers find out about where their tattoos are? By stuffing remote cameras inside the candidates’ clothes?

Generally, any airline policy would say that cabin crew cannot have visible distinctive marks, be they scars, birthmarks or tattoos.

Normally a candidate is required to declare if she has any of such mark on her body and where are they exactly positioned.

If the candidate refuses to declare such marks, it would eventually be found out during the physical or medical examination stage. If they find a mark that you have not declared, you will be asked to go home.

Even if you get employed and decide to have a tattoo, your airline medical examination will uncover this and your employment contract will be ceased immediately.

Singapore Airlines is strict on tattoos as well. Although more liberal than Malaysia is, visible tattoos, scars and marks are not allowed to be on any of its cabin crew.

This is firstly because of the branding of Singapore’s icon. Whoever had read the book “Branding Strategy: The Singapore Airlines Story” would know what I mean. Branding in Singapore Airlines lingo means uniformity – Asian hair (no blonde Asians), Asian features, similar makeup, nails and service attitude. You cannot even talk on your mobile phone while walking in the Singapore Girl uniform.

Secondly, the branding of Singapore Airlines, or of any airline for that matter, is about superficiality. Being in an airliner is like being in a five-star hotel. Everyone wants to be served by a pleasant and well-groomed waiter/waitress, or in this case, stewards and stewardesses.

So it is not as easy as Air Asia’s claim of zipping up and you can become a cabin crew no matter if you have pock marks or pus-filled acne on your face.

Malindo Air’s cabin crew, like the ones Malaysia Airlines and Singapore Airlines have carry that image of elegance. You know you are not on board an Air Asia flight when on board any of the other three airlines mentioned.

In short, although it offers inexpensive fares, Malindo Air maintains its brand and class. It certainly does not feel like a no-frills airline.

If you look up the definition of no-frills you will see that it means, among others, providing only the basic necessary of service – in another word: CHEAP.