Last night, BigDog revealed that Mukhriz Mahathir did not receive a single nomination for any of ANSARA posts. This is a drastic change when he used to be the leading figurehead of ANSARA.

Compared to MCOBA, ANSARA is not politically-inclined at all save for some chapters. But even those Pakatan-leaning chapters did not nominate Mukhriz for any position.

When I advised the committee members of an Air Force veterans association to seek help from Mukhriz the Menteri Besar over an issue they were facing in Kedah, they shook their head saying they would rather seek help from the EXCOs or individual ADUNs as Mukhriz was not a performer.

Of course, Mukhriz has been making his rounds in his parliamentary constituency but even people there tell me that he hardly visited them when he was the MB. They dismissed it as a superficial attempt to show that he is still relevant.

He even visited Langkawi, where his own father is the self-appointed Ketua Pribumi, to tell people of his vision to develop Langkawi even further, including turning the padi patch behind the Ayer Hangat Cultural Village into a commercial area.

The problem is, the islanders are aware that for 22 years, Mukhriz’s father only brought development to the southern part of the island, enriching cronies and outsiders, giving them land, leaving people in the northern half to fend for themselves.

Just like Pulau Pinang, there is hardly a beach that locals could go to to enjoy.

Other than bitching about what BN does, they are also good at doing bad things like creating fear among the kampung folks by dishing out lies.

An example is the putting up of a land office map of several kampungs in Seri Medan with a crudely-drawn rectangle showing “the new alignment of the High Speed Rail” that will affect the respective kampungs. Not even people in the Johor Land and Housing committee have heard of such re-alignment of the HSR.


Although Pribumi has a foot in Kampung Parit Seri Menanti where a former UMNO man angered by not being given contracts had set up a Pribumi branch, the party has made a base out of Kampung Sri Bengkal’s favourite Soto Kambing joint in nearby Parit Yob which is operated by a housewife and her amputee husband.

But seeing the number of likes and comments on the Instagram page belonging to a high-ranking Pribumi official shows that the 1.5 million signatures of a petition presented by Pribumi AMANDA’s Syed Sajat is nothing but a fabrication.

Of late,  even Pakatan-organised talks cannot muster the same crowds as they used to. A sign that people are weary of the amount of bitching the Pakatan has been doing instead of spending time and taxpayers’ money in the form of their allowances to do good for the rakyat.

There may have been some crowd when Mahathir was in Kuching recently but you can hardly take that as a show for support. Even my BN-supporting relatives were there “to see what the fuss is all about” and to see what stallowners have to offer. 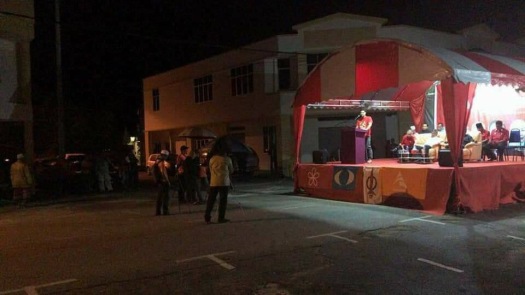 Even the President of Pribumi who claimed he was expelled from UMNO for fighting against the alleged excessiveness of Najib Razak, could muster a handful at his talks.

This is the sorry state of support that the Pakatan could muster. It tells a lot. Maybe they should save the trouble first before saving Malaysia.