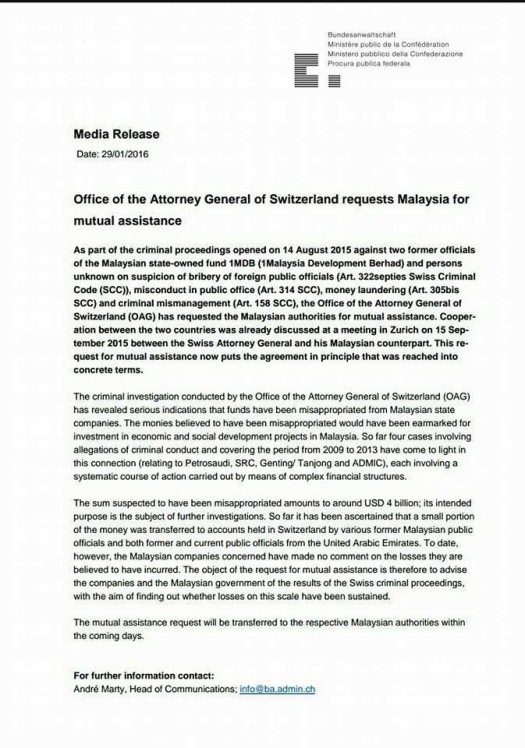 When the statement above came out, I was like “Whoa! What’s this all about?” I wasn’t caught surprised by the statement, I was more surprised that a press statement was made by the Attorney-General of Switzerland, Michael Lauber, when all he could have done was to call up his Malaysian counterpart and seek help.

So, what’s with the drama, Michael Lauber?

Geneva MP, Carlo Sommaruga has been trying for years to get the Michael Lauber to declare Sarawak governor Taib Mahmud’s family a criminal organisation for the alleged timber-riches gained by the Taib family. The main complain comes from the Bruno Manser Foundation. Manser, a Swiss-national cum activist went missing on 15 February 2000. A lot of theories have been offered on his disappearance, much like the disappearance of Jim Thompson on 26 March 1967. Theories were in abundance but as the saying goes, it’s a jungle out there, literally. And to disappoint the conspiracy theorists, murder isn’t the only reason a person could disappear in the jungle.

What is the connection here? The report that prompted the statement above was made by the Bruno Manser Foundation. The Foundation also finances Sarawak Report. Both Bruno Manser and Claire Rewcastle Brown are the apparent gwei los who have been chosen to save Malaysia. Lauber, although is an Attorney-General, was not appointed as one, but was elected by the United Federal Assembly of Switzerland. I will leave this portion at that for the moment.

Now, if you notice, there is always a pattern of attacks. Everytime the Ringgit strengthens, outlooks start to look positive and our stock market jumps, these gwei lo organisations will issue statements or get someone to issue a statement like the above. We see this occurring many times especially when the attacks on the 1MDB peaked last year.

Back to Michael Lauber. Being the elected Attorney-General, his office comes under the Federal Department of Justice and Police which is headed by Simonetta Sommaruga, who was also the President of Switzerland until 31 December 2015. If you notice the surname, yes, she is a relative of Carlo Sommaruga mentioned in the early part of this post. Perhaps an election for the Attorney-General’s post is near!

Hence you get the very unprofessional conduct of issuing a press statement instead of making a call to his counterpart, a very unethical and unbecoming conduct of an Attorney-General and sure does not reflect mature professionalism of the civil servants of this well-respected country.

And for this unprofessional conduct by the Swiss AG, our AG has issued the following statement:

1. I note the statement issued by the Office of the Attorney-General of Switzerland, and further remarks attributed to the Swiss Attorney-General by an American newspaper, concerning an investigation into two former officials of 1MDB.

2. I and the relevant Malaysian authorities are keen to establish all the facts about 1MDB that have led to recent allegations against the company. That is why a number of investigations – including by the Public Affairs Committee, the Royal Malaysian Police, and the Auditor General’s Department – are currently on-going.

3. The Malaysian authorities, including the Attorney-General’s Chambers, are committed to working with all relevant foreign law enforcement entities through the applicable international conventions and agreements. Similarly, 1MDB has from the outset cooperated with the enquiries.

4. Regarding the recent public statement by the Office of the Attorney-General of Switzerland, my office intends to take all possible steps to follow up and collaborate with our Swiss counterparts, and we look forward to receiving the findings of their investigations and materials through the normal channels. These materials will then be reviewed, alongside the findings of other relevant authorities and our own investigations, to determine the appropriate course of action.‎

5. Contrary to recent media reports, the investigations into donations that were made to the Prime Minister are entirely separate to those into 1MDB. The Attorney-General’s Chambers exhaustively reviewed the report provided by the Malaysian Anti-Corruption Commission and, as has been announced, found no evidence of wrong-doing and hence have instructed for the cases to be closed.‎

6. Any attempt by media organisations to conflate the two sets of investigations is irresponsible and prejudicial‎.

The Bruno Manser Foundation must be desperate to damage the reputation of the government of Malaysia in the run up to the Sarawak State Election.

But I’ll write on that one day…