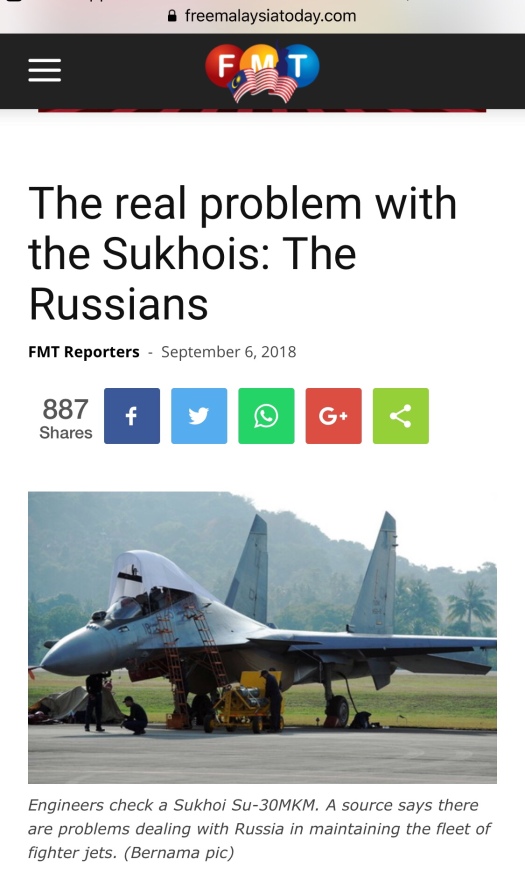 When the Defence Minister revealed to the world that we only had four Sukhoi Su-30MKMs that could fly out of the 18 that we have, I kept quiet because no one was interested in listening. This problem of the Sukhois had already been anticipated by both the Royal Malaysian Air Force (RMAF) and by defence observers such as myself.

The RMAF was never told by Russia that once the fighters reach their 10th year, a major maintenance was required before they reach another milestone.

This problem had been anticipated from a couple of years back, even as early as under the leadership of the previous Chief of RMAF. The RMAF had since then made sure that all the other assets could make up for the Sukhois being offline for some time.

Today, news portal Free Malaysia Today reported an anonymous RMAF source saying that the problem of the Sukhois is not the weakness of the organisation’s maintenance regime, but more because of the way the Russians do business.

The deal with Russia for the Sukhois were made in 2003 during the final year of the administration of the 4th Prime Minister, and were delivered to the RMAF in 2007 and 2009. Receiving good support initially, Russian bureaucratic ways soon set in and made things difficult.

Although Western countries have offered Malaysia their fighters, buying from them always come with strings attached. When we purchased our earlier Boeing F/A-18 Hornets, the US did not allow them to come with the advanced weapons. We only received those after the Russians sold us their version of those weapons.

Coupled with slashed budgets, the RMAF had found it difficult to ensure that the Su-30MKMs undergo their 10th year undisclosed maintenance.

Russia needs to learn to rid itself of the bureaucracy that riddles its defence industry if it wants to continue having developing nations’ trust. Else there is no choice but for their air forces, including ours, to seek fighters elsewhere.

The project was awarded to Syarikat Pembinaan Setia Jaya Sdn Bhd on the 24th March 2014 and supervised by the Department of Works. However, Solar Alert Sdn Bhd took over the contract after the main contractor was unable to complete the works.

The delay was mentioned by the Auditor-General in the 2015 report.

With the completion of the center, the RMAF now has the capability and capacity to perform second-line servicing for up to ten Sukhoi Su-30MKM at any one time.

At a parade consisting of 11 officers and 109 other ranks, General Tan Sri Roslan reminded the personnel of the importance of keeping the operational readiness at a high level as Gong Kedak is strategically important to the defence if the nation.

He also cautioned about the current threats to the men and women of the Armed Forces such as Da’esh and other negative activities that should be avoided by all.