In the last General Elections, Barisan Nasional lost badly compared to its 2004 sweep simply because it got big-headed and complacent, and its leaders felt over-confident in another landslide majority. This complacency was evident in the BK5 and K10 machineries that performed its task to gauge the voters by not actually going down to the ground. This act was dubbed “Ops Tiarap” or doing something while lying on one’s stomach. This time around, I cringe whenever someone from Barisan Nasional announces that he is confident that so and so state would be won back by Barisan Nasional.

Najib, as Prime Minister, had inherited a badly-beaten Barisan Nasional from his predecessor a year after the elections. His predecessor seemed reluctant to step down, and was viewed by many as being in a state of denial of captaining Barisan into the biggest slap it has ever received. Therefore, Najib had four years to transform the image of Barisan Nasional into one that is respected by many again.

As for the Pakatan Rakyat, it started off well in a way, even Lim Guan Eng, as the Chief Minister of Penang had offered Barisan Nasional representatives to help out in managing state-related affairs. However, after a while you see the true colours of the loose coalition, especially in the states of Perak, Selangor and Penang. You see the ones who are actually in control of these states are from DAP. DAP ruled Perak and Selangor by proxy, and this is the manner in which Malaysia would be governed should the Pakatan Rakyat win this election. You can read more of this in one of my previous postings, Taken For A Ride. DAP’s attempts to portray itself as a multiracial party fell flat on its face when all the Malay candidates who vied for a seat in the party’s Central Executive Committees were rejected by the Chinese-majority delegates. Declaring there was a problem with the Excel sheet it used for the elections a month and a half later, DAP declared that the Malays actually have an elected representative in the form of one Zairil Khir Johari, who is not even a Malay.

PAS has its own set of problems when it is seen as not being able to overcome its fear of Big Brother DAP, so much so that many of its reps blatantly kowtow to the demands of the DAP. This is even more evident when PAS did nothing to condemn the efforts by Christians to proselytise Malay Muslims.. It is no secret whatsoever as to who are the non-Christians among the DAP leadership. And it is not difficult to amend the Federal Constitution when it comes to the special position of the Rajas and Sultans, the Malays, and Islam as the religion of the Federation. I shall explain this in the next paragraph.

In the process of the enactment of law, a Minister will draw a bill with the help of the Attorney-General’s Department. This bill is then passed to all Members of Parliament (MPs). This bill will go through three readings and a study by a Dewan Select Committee. On the first reading, a Minister reads a brief subject matter of the bill to the Dewan Rakyat and the House Secretary. On the second reading, this bill is debated extensively, after which the Dewan Select Committee will study it further and make amendments where necessary. On the third reading, this bill is voted by the MPs. If it attains a 2/3 support, it is considered as passed.

Therefore, the fear felt by Muslim Malays do not come unfounded, as evident in the pictures below: 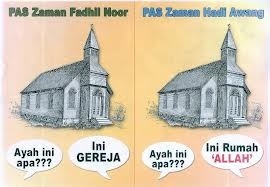 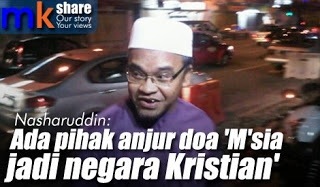 And the most worrying part about the politics of hate advocated by the Pakatan Rakyat is this:

As for the PKR, in my opinion it will fare worse off as compared to the previous elections, that its de facto leader, has announced abandoning his voters in Permatang Pauh, to contest in Perak instead.

Among the three parties that make up the loose coalition, DAP will reign supreme. PKR will emerge as the biggest loser.

How would the states fare?

Kelantan: despite the BN gaining more seats, it is in my opinion that Kelantan will remain in PAS’s hands.

Terengganu: it will be a close call as in the previous elections, with BN still holding on to it.

Sabah: with Yong Teck Lee going around telling voters how Anwar Ibrahim tried to subjugate the state, and the Pakatan Rakyat links to those behind the Lahad Datu armed incursion, Sabah will still be in BN’s hands. But the local parties will give Barisan a run for the money.

Johor: DAP will make a few more gains here, especially in the urban seats, but BN will still retain this state.

Melaka and Negeri Sembilan: will remain in the hands of the Barisan Nasional.

Selangor: despite the efforts of the Barisan Nasional, I opine that it will remain in the hands of the Pakatan Rakyat. However, I believe that DAP will have a Menteri Besar-designate from their ranks this time instead of having to rely on rulingbthe state by proxy again. PKR will lose badly in this state.

Perak: this will be another state that will have a close call. The jury is still out on this one, and the same goes for Kedah.

Penang: with the gentrification of Penang, the half-island state will remain in DAP’s hands. And when I say DAP, I mean the other two parties will not fare well this time.

Of course, the above is just my opinion, and I stand corrected. The outcome may be different.

However, do not experiment with your children’s future. Your decision this round will determine the course for their future.

Be careful and be wise with your choice. If you snooze, your children lose.