The Malays have a proverb:

“Melentur buluh biarlah dari rebungnya (To bend a bamboo, you must do it from its shoot”

Of course Malay proverbs don’t mean much to the others, but since Proverbs 13:24 speaks about it, I’ll quote it:

“He that spareth his rod hateth his son: but he that loveth him chasteneth him betimes.”

Today’s posting is brought about by a statement by Rohani Karim, the Minister for Women and Family Development, saying that with the ratification by Malaysia of the Child Rights Convention, caning by parents will soon be a crime:

Even with the present Child Protection Act, the government cannot stop orphanages and Islamic-Knowledge centres from exploiting children, the government is already thinking of a new remedy instead of tweaking the old one. This is the same knee-jerk reaction the government had when it abolished the Internal Security Act and is now reeling in agony with the increase in violent crimes, seditious remarks, all on a daily basis.

Each of my children have been spanked at least once when they were little for breaching the “line.” I won’t say that they are perfectly disciplined but not one of them grew up touching things they are not supposed to, be it at home or in other people’s home. I am glad they know how to show respect to others and are not as wild as other children are, and know when to draw the line. You don’t beat them up senselessly, you discipline them and explain why they aren’t allowed to do certain things and what would the consequences, other than getting punished, be.

I don’t know if Rohani Karim understands the contents of the CRC before ratifying, or did she ratify because it would be trendy to do so? You know, the “I am part of the big league” feeling you get, and the pat in the back others give you for kow-towing to their standards? Let me refresh her knowledge on the CRC:

So, children in countries that have ratified the CRC must be given the rights to choose their own religion, while parents only have the right to advise. The government would also have the authority to override the decision parents have made for their children. The children can also seek “governmental review” if they disagree to the decisions that have been made by their parents.

What is this world coming to? What will Malaysia become?

Malaysia is already suffering from a high number if juvenile crime. Gangsterism, rape, substance abuse, break-ins, violent crimes committed by juveniles increased by more than 5,000 cases in 2013 compared to the previous year, said the Home Ministry. People are clamouring for an amendment in the various laws to send parents to jail with their children for any crime that they commit due to neglect by the parents, yet Rohani agreed that children should not be punished. We already suffer from teenage Mat Rempits making a ruckus at night while we are trying to sleep, schoolboys on motorbikes without licence scratching our car, not wearing helmets, or turn into snatch thieves injuring, maiming or killing some old lady in the process.

The CRC will also give the right to children access to information, and you know what kind of information that are readily available on the Internet like they are not doing that already; they will have the right to peaceful assembly, freedom of expression and association. And the CRC applies to children below the age of 18.

We as a nation are already suffering since the next generation of leaders are already without conscience and moral, and Rohani sees fit that we give them more freedom to decide on what they want while parents are to slave to make sure that their needs are met and protected. Soon, we will have more cases of abandoned children and newborns found in toilet bowls and rubbish bins because of this. 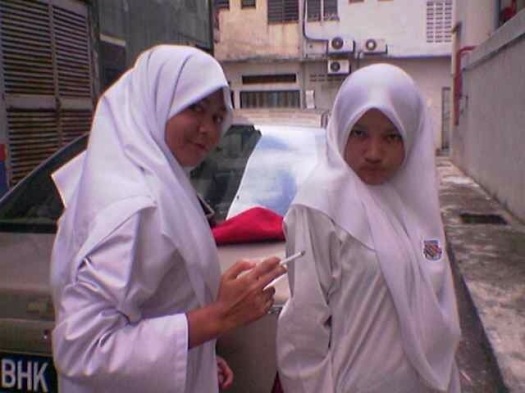 Come on, Rohani. Wise up! You should weigh the requirements of the CRC against our culture and religions before deciding to become popular with foreigners.

What I would give to have a decently-intelligent Minister here in Malaysia.

One day, you will find parents being sued by their children for “mental abuse” by merely staring at them!