I write this as a warning to my Muslim brothers and sisters. No matter how you conduct your life, you should never compromise your attestation to Allah being the True One God, and that Muhammad is His Messenger through whom His message was delivered to complete what started millenniums before.

The issue of the use of Allah in the Herald has been resolved…well, more or less. I still see on my timeline some people still tweet about it, or have it as part of their Facebook status. I see the occasional Christian politician from Sabah still trying to flog a dead horse by crying foul over the issue although the ruling does not affect Christians of Sabah and Sarawak; while many others who do not understand the history and reason behind the permit to use of Allah in Bibles and Christian literatures in Indonesia, Sabah and Sarawak but not in the peninsular should read my previous writings on this issue:

The Case For God

I also wrote about the word to describe God in Malay in The Case For God Part 2, and I wrote on the subtle ways to undermine the faith of Muslims in the peninsular. You may say that the issue of faith is petty, but if you have met, as I have, Muslims whom have proselytize, you would be shocked to see the numbers and where they are originally from, and with what background.

If I mention the name Joshua Massey I am sure many Malaysian Muslims do not know who he is. I don’t know who Massey is either but that is the pseudonym of a Christian missionary who has written many articles on how to minister Christianity to the Muslims. Among the articles he has written include Should Christians Use Allah In Bible Translation?

In this article, Massey concluded that it is necessary to use Allah in Bibles and not to discard such easily redeemable terms, but to fill them with Biblical meaning. The more a Muslim’s understanding of Allah is informed by the Scriptures, the more Biblical their theology of God will become. Filling familiar words with new meaning, rather than tossing them aside as irreparable, is something the church has wisely done from the beginning.

Of course, in a non-Arab speaking Muslim country, it would be a lot more difficult to penetrate the Muslim community to spread the gospel. Enter the C5: the so-called liberal Muslims who, amongst us, have been saying that it is a small matter for others to use Allah to refer to God. C5 is a category among a spectrum of Christians ranging from C1, referring to those missionaries who set up churches and conduct masses and prayers in the missionaries’ original language, to C6 – those who still retain their Muslim identity and never reveal their faith to Muslims. This spectrum was introduced by a missionary who writes under the pseudonym John Travis. Like Massey who lives amongst Muslims in Asia, Travis too has spent a large portion of his life living amongst the Muslims.

C5 Muslims do not call themselves Christians. They call themselves the Followers of Isa al-Masih, or Jesus the Messiah. They are the Messianic Muslims who reject any unbiblical Muslim practise, and dare to label Muslim practices barbaric, or against human rights, or restricting women’s rights. Anything and any platform they could use to attack the sanctity of Islam, they would. Do not get me wrong: C5 Christians still go to the mosque to pray, still attain their identity as Muslims, but they will back their Christian friends when attacked by other Muslims, not literal attacks though.

Massey knows that Muslims will not attack, as it is unIslamic to be the belligerent, but will defend to their death their land and faith. So you get the C5s to do the attacks for you, therefore the defenders will then be labelled racists, extremists and other labels already thrown by these liberals. In the words of Travis:

“Some C5 believers adopt Samuel Zwemer’s approach toward Muhammad by affirming all the truth Muhammad brought and never speaking disrespectfully of him. They emphasize that Muhammad was a great statesman and religious reformer, bringing Arabs from pagan polytheism to Abrahamic monotheism. They are quick to add that Muhammad spoke of Isa the Messiah (his virgin birth, miracles and sinless- ness) and acknowledged that the Torah, Zabur and Injil are God’s Word and must be obeyed. When it becomes clear that the Muslim listener is ready for more, they, like Zwemer, share Jesus as Lord and Savior. My observation is that over time, without dictating how new MBBs should view Muhammad, he becomes less and less important to them as they grow in their love and obedience to Jesus”. 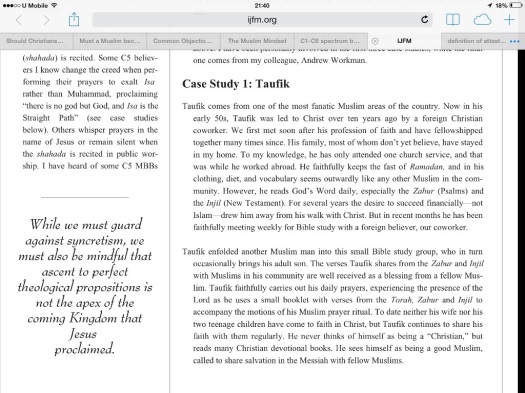 The above is taken from John Travis’s article in the International Journal of Frontier Missiology, telling how a Muslim was befriended by a Christian friend, not to accept Christianity, but to also accept the other Books: a concept not unfamiliar in Islam. Working on this and the other concept mentioned in the Quran that Allah does not make any distinction between His Prophets, they work towards undermining the Shahadah.

Similar modus operandi have been seen here in Malaysia. In one case that involved a friend of mine putting a stop to it, a Muslim factory worker was befriended by a fellow male worker, a Christian. She got pregnant and was shunned by her family. With nowhere to go, her boyfriend brought her to see a priest who showered her with compassion. Her roommate managed to sniff the method and alerted an agency my friend was with, and rescued her. In fact, among the DUMC attendees whom I had met last year all spoke of similar subtle methods. Some had converted over a few pair of jeans, some money, rice, so on and so forth. For me, I blame the Malay/Muslim society for failing to help the needy, or for driving away family members who are in need. I remember one Pusat Pungutan Zakat officer who argued intensely with me, insisted that there were no poor people in Petaling Jaya, until I showed him a squatter village.

But that is the fact of the matter – we Muslims in Malaysia are not caring enough. And Muslims are oblivious to threats, not just from the outside, but from the inside as well. Muslims always think that they are strong, and at the same time allow every attempt to chip away at the foundations of Islam in this country, namely the Federal Constitution, and the institution of the Malay Rulers as custodians and protectors of the religion of Islam and the Malay customs. Every attempt to defend these institutions are being portrayed as acts of racism and oppression of the minority, when in essence it is the 60.4 percent Muslim population is the minority. They are split into three: two one thirds that have nothing better to do but claw at each other, while the other third collude with the evangelists to attack the other two thirds.

I leave you with an extract from a missiology website about the one third that is helping to destroy us, and urge all you Muslims to pause for a moment and think:

For all those who remember my previous posting on the Allah issue (The Case For God – Part 3, I wrote on Christian publications in Malay in the 19th Century, and how similar publications have made their way into modern-day peninsular Malaysia. One must be wary of religious books bearing Arabic terms that may be representing Christianity but with an Islamic image. I was also informed that in some mosques in this country, as mentioned in Massey’s and Travis’s articles, Arab Christians or Christian Malays have begun preaching to youngsters. Dressed as pious Muslims, they confuse the youngsters using the modus operandi mentioned above.

And I will also be meeting with a Christian friend, who has told me how some of his family members and friends have been actively proselytising needy Muslims in the south of the peninsular. Hopefully this time, I will get to learn more of their modus operandi.