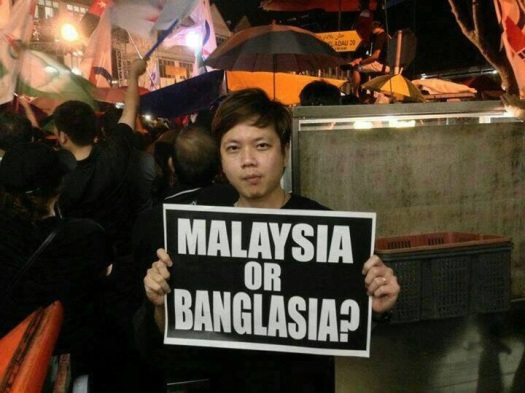 Isn’t it funny how anyone could deny one’s wrong-doings and try to dupe the rest with more lies? What is even funnier is that learned people keep on getting duped. Whoever can forget the lies told in the run up to the 13th General Election; lies about the 40,000 registered Bangladeshi voters that saw innocent Bangladeshi-looking Malaysians getting manhandled by paranoid supporters of Anwar Ibrahim? Then came the lies about the Blackout in a constituency which saw DAP as the winner there.

Yet many Malaysians are gullible enough to believe such lies and accept them without verification, and in turn bad mouth the country to outsiders. Road shows were made to garner support for the Black 505 movement or whatever that farce is called. Now, Anwar Ibrahim plays a chameleon denying ever saying anything about dubious voters.

Probably, he was referring to his press statement made three days before the general elections. Now, be the foreign voters Bangladeshis, Myanmarese or whatever-have-you, that ludicrous suggestion as well as the blackouts were debunked by DAP’ strategist, Ong Kian Ming, in concurring findings by PEMANTAU.

So, Anwar, you made no reference whatsoever to Bangladeshis and other citizens voting during the last General Election? Let us watch this video especially in the third minute, specifically from 2:55 to 3:15. I love the background music. So. Hitlerish.

Of course, let us not forget how he mentioned specifically meeting Bangladeshi voters and had a chat with them. Wow! And he never made reference to foreign voters? No Bangladeshis? This video is Anwar at his story-telling best. Anwar being his usual self.

And if you think that whatever Anwar’s lies has no bearing on the image of the country, his statement two days before the General Election was picked up by the Singapore press.

I am writing this because I find it funny. I find it funny because despite what i have posted here I am sure many idiots will still believe Bangladeshis actually voted and there were blackouts that occurred during ballot counting. What is even funnier is Anwar’s appeal to dismiss Shafee Abdullah as prosecutor in the sodomy appeal case was turned down by the. Federal Court.

Thank you Firdaus Christopher for helping me with this piece.