While some Muslims continue to invite me over Facebook to attend an apologetic forum; while Muslims including the daughter of a very prominent senior politician become apologists upholding the notion that the Trinity God of the Christians and the Muslims One God is one and the same, I remembered one of my postings made in January 2012 called “The Case for God – Part 2” where I made mention of the origin of the concept of Trinity.  It must be remembered that Emperor Constantine 1, a Pagan and worshipper of the Sun God, was the one responsible in introducing the Trinity doctrine to unite the Christians.  Those who did not subscribed to this doctrine were persecuted and banished.

And I found this:

THE SURPRISING ORIGINS OF THE TRINITY DOCTRINE

“Surprise, surprise!” as Cilla Black would exclaim on the show produced for ITV by London Weekend Television.

While it is true that it is a Muslims belief that Allah is The Supreme Being, God for All, Allah as God in Islam neither begets nor is He begotten.  This is the fundamental belief that all Muslims hold to.  The Pope and the Vatican, I believe, worship Deus.  Deus is the Latin word for God, derived from a proto-Indo-European word deiuos or deiwos and cognates with the Sanskrit word Deva or Dewa.  For that reason I do not see any of the die-hard adamant Allah-wannabe-users would still use the name Allah to describe God if they were to migrate to, say, Australia, the UK, USA, or Italy.

Even the origin of the crucifix is said to have come from pagan practice (I know you naughty people have been saying that Allah and Islam are of pagan origins).  Christians only started to use the symbol of the crucifix 300 years after Christ had established his church. The Babylonians of Chaldea were the first to use the crucifix to symbolise the God Tammuz and the use spread to China, India, Mexico centuries before Christ.

In 46 B.C., Roman coins show Jupiter holding a long sceptre terminating in a cross. The Vestal Virgins of pagan Rome wore the cross suspended from their necklaces, as the nuns of the Roman Catholic church do now. The Davis Dictionary of the Bible states about the origin of the cross: “The pre-Christian cross of one form or another was in use as a sacred symbol among the Chaldeans, the Phoenicians, the Eqyptians, and many other…nations. The Spaniards in the 16th century found it also among the Indians of Mexico and Peru. But its symbolic teaching was quite different from that which we now associate the cross” (p. 159).

And for the true believers of Christianity, do read up where the Bible clearly teaches that Christians must not practice or tolerate any pagan ways, customs, traditions or practices, specifically in Deuteronomy 7: 1-6; Jeremiah 10: 1-5; and Revelation 18: 1-4.

For you Muslim apologists of the Trinity concept, I leave you with this from the Quran 9:30 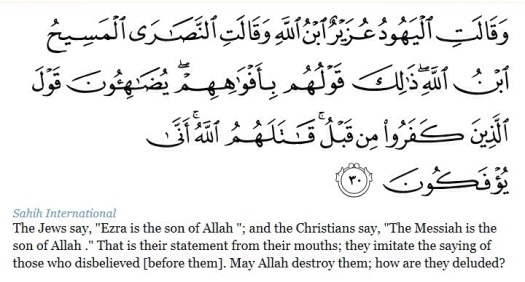