Mahathir seems to have a lot to say, mostly without substance, and as he recently admitted, without evidence to put his money where his mouth is. This is Miss Lim Sian See’s take on the whiny old man’s latest post:

There’s a new blog post from Chedet today.
Tun M is still intent on defending his two MACAIs, the selfie-fan Khairuddin Abu Hassan and hunger-strike-until-death-fan Matthias Chang from charges of sabotage.
I wonder if Tun M knows what documents did both of them give to the foreign countries’ agencies – something which Khairuddin himself admitted he has done?
Were they real OSA documents from govt or were they faked ones?
If both of them gave confidential Malaysian govt documents to foreign agencies, is it a crime?
if both of them gave fake documents to foreign agencies, is it a crime?
Anyway, Chedet ended his blog post with this:
“Since it was Najib who created 1MDB, borrow 42 billion Ringgit and invested the money and losing it, Najib should also be charged with sabotage.
Alternatively everyone, from the initial set-up of 1MDB to the borrowing, to the newspaper reporters and the reports to the police should all be charged with sabotage of Malaysia’s financial and banking systems.”
I am not sure RM42b was completely “lost” as Tun M said. If lost then how did Arul and 1MDB recover it?
And if RM42b was lost or billions were lost, how come two top international auditing companies could not detect such losses for five straight years? They useless is it?
I am also not sure you can say that newspaper reporters reporting on 1MDB can be considered the same as passing real or fake confidential govt documents to foreign countries and hence should also be arrested.
Anyway, what do I know? I am not “anugerah allah” PM for 22 years hence my logic will not match his.
But, if Tun M still needs further clarification that RM42b did not lesap, perhaps he should also participate in the upcoming Arul-Tony Pua debate/live talk show and ask questions too.
If don’t want to show face and participate, you can always WhatsApp your questions to Tony to ask on your behalf.
1MDB being settled and debts being wiped out on schedule- hence it seems Arul now has time to come out to debate Tony Pua and even went on a full 1 hour Q&A with the assembled press last Saturday.
As a side-note, it is interesting to see that his continued rants on his blog is no longer as popular.
Previously, for almost a day after a new post was posted, you would have difficluty accessing his blog due to high traffic.
Now, it’s really super-fast: Here: http://chedet.cc/?p=1904

Maybe Mahathir should just have a debate with Arul Kanda once and for all. 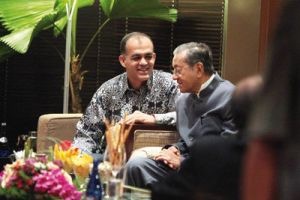