“UMNO can offer projects but if you support PAS, you support Islam and the reward is a place in heaven.”

That was what the State Assemblyman for Ga’al from the Pan-Malaysia Islamic Party (PAS), Dr Nik Mazian Mohamed was quoted to have said aday or two ago, as pointed out by a journo on The Star on 27th January 2013. He also added:

Such is the mandate that God has given PAS that they could offer not only God’s heaven, but also twenty percent oil royalties. Talk about the wonders of having God on your side, and power to deliver riches.

However you believe it or not, there are people gullible enough to think that PAS, a party that the Prophet Muhammad (PBUH) had never join, can offer such things. To the simple mind, if you carry the name “Islam” on your party’s official name, then that has to be an Islamic thing therefore should be supported without question. Even if the person making the religious decree has had a case of being found in a hotel room with another man’s wife!

The words uttered by these people are, to these simple minds, inscribed in stone. If you were to question them, you would go straight to hell! Or worse still, be brand an UMNO-lackey, which to PAS, is worse than being “Hudud-over-my-dead-body” Karpal Singh, a DAP supremo. No matter how ridiculously illogical (redundancy intended) the words maybe, or how unIslamic the nature, is as if God had spoken through these ragheads and there is no other manner but to obey.

How can mere mortals promise you paradise, or hell’s wrath? Twenty percent oil royalty…a big maybe. But of course they would have to kowtow to the very people who are known to be involved in the attempts to proselytise Muslims in Malaysia, and are so dead against Malaysia being known as an Islamic country, let alone enforce the sharia law!

Prophet Muhammad (PBUH) himself was quoted to have said:

By Allah, though I am the Apostle of Allah, yet I do not know what Allah will do to me.” Sahih Bukhari Volume 5, Book 58, Number 266

And this supports Allah Subhanahu Wa Ta’ala mentioned in the Quran:

“Say, [O, Muhammad], “I do not tell you that I have the depositories [containing the provision] of Allah or that I know the unseen, nor do I tell you that I am an angel. I only follow what is revealed to me.” Say, “Is the blind equivalent to the seeing? Then will you not give thought?”- al-An’am 6:50

Of course, being Malays, a shortcut to God is far better than understanding the content of the Quran. Why bother when you have bearded ragheads to do all the thinking for you? This is the reason myopic Malays who believe in dogmas when Islam is free of it fail to know the warning God has given them:

Which brings me to another supposed God-fearing politician, albeit without the beard and rag. This one is a woman, married to a Ram. Hannah, as the name is given, is a Hebrew word that means “Gracious” but is far from that.

When a well-known journo asked on Twitter on the 27th January 2013 if he should give a vote to the Opposition in the state of Selangor (Barisan Nasional), my wife replied a resounding “Yes.” When asked from the former her reason for saying so, well, the screen capture below says it all: 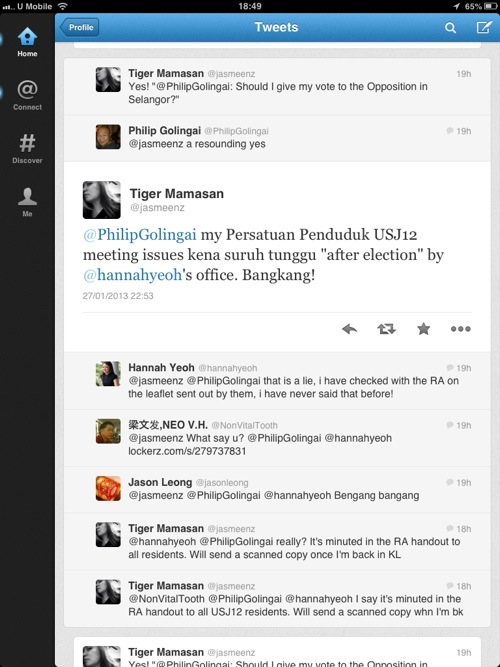 As you can see in the thread, a handle called NEO V.H (@nonvitaltooth) posted a screen capture of Hannah’s very swift response to my wife’s post which I have in turn screen-captured:

So, Hannah has accused my wife of lying. Well, here is a screen capture of the said Residents Association letter:

Please read paragraph 4 in the above image and let us see who has been lying to her constituents, shall we?

Perhaps, God-fearing Hannah Yeoh has problems reading the Bible as PAS-supporting Malays have with the Quran.

Perhaps, I could refresh this God-fearing state assemblyman for my constituency that “Satan is the father of lies” (John 8:44); that God hates a lying tongue (Proverbs 6:17); and that all liars will have their part in the lake of fire (Revelation 21:8).

Had Hannah Yeoh took time to listen and seek the truth instead of being a swift-tongue and lying to her voters, I would be very GRACIOUS towards her. No, the name Hannah does not go well with me, thank you.

But of course, the Bible has something for those who are swift-tongued too! Proverbs 18:13 clearly said:

“He that answereth a matter before he heareth it, it is folly and shame unto him.”

And of course, John 1:19 has warned us to be swift to hear, and slow to speak.

I guess Hannah and the ragheaded goats do not fear God at all!