As thousands of Rohingyas turn up in the waters off Thailand, Malaysia and Indonesia, thousands more die in the high seas never to find the refuge they sought. Myanmar meanwhile continues to turn a blind eye on the issue. These boat people are no longer in Myanmar waters, therefore they are no longer Myanmar’s problem. Hundreds have been slaughtered by unscrupulous human traffickers in “camps” in areas in Southern Thailand. Even the highly-celebrated champion of democracy, Aung San Suu Kyi, has admitted that she is a politician and “not a moral organisation or anything like that.” Disgusting is the only way I could describe her reaction, for a lack of better word.

I do not envy the position of the Malaysian government. Myanmar is part of the ASEAN brethren. Thousands of Rohingyas have already sought refuge in Malaysia in the past, and Malaysia has always been the country preferred by boat people to land at.  After the fall of Saigon in April 1975, hundreds of thousands of Vietnamese refugees appeared on the shores of Malaysia.  Those in their 50s might remember the plight of thousands of refugees on board the MV Hai Hong and how Bidong island, off Terengganu’s idyllic village of Merang, housed thousands of Vietnamese. Very few countries agreed to accept some of these refugees. Thousands more were stranded in Sungai Besi, forgotten if not by all, and became a problem for Malaysia up until the early 1990s.

Finally, Prime Minister Najib Razak came out with a statement of concern on his blog. And I wondered how would Malaysia start with helping these refugees, I found this on an acquaintance’s Twitter post: 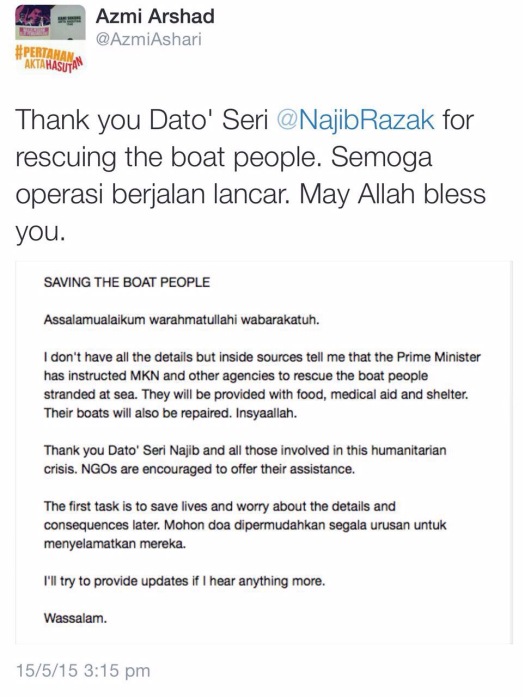 May God bless Malaysia and continue to guide the leadership to continue to make the correct decisions.

Meanwhile, all other ASEAN nations should take a hardline stand on Myanmar and compel its government to put a stop to the persecution of the Rohingyas. This is to be a test on ASEAN’s members’ moral conscience, jointly and severally.