So said the Oversight Review Panel of the Malaysian Anti Corruption Commission that met for the last time on the 24th February 2016 at 10am. The meeting lasted three hours and they concluded the meeting at 1pm.

Didn’t the ORP agreed to a statement saying Najib should face the music? The Star came out with this: 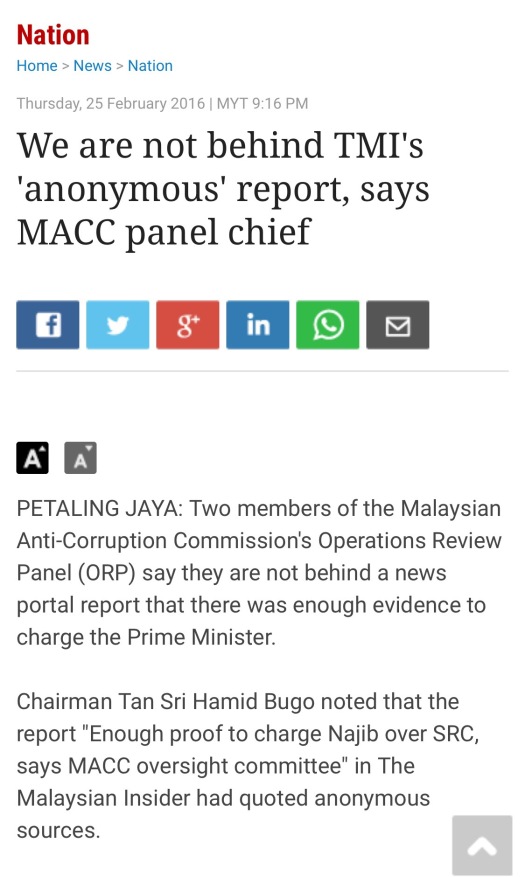 There is a straight denial by the Chairman of the ORP on the “statement” released to The Malaysan Inciter. The Chairman issued the following statement:

Therefore, not only did the ORP not issue such statement, it has also denied requesting the MACC to issue a public statement on the issues.

I have a word of advice for Rohaizat, who is the Director of Strategic Communications and Media for the MACC. The MACC is a body that is supposed to be the epitome of the word integrity. Rohaizat has none and he should just resign, discard his uniform and join the line of ladies who have nothing better to do with their mouth.

In the meantime the police should investigate the “ORP statement”, The Malaysian Inciter, and grill Rohaizat to see who is paying him to be such a girl.

I haven’t said much about the RM2.6 billion money that was donated through a vehicle bearing Najib Razak’s name. What I know for sure is that the Malaysian Anti Corruption Commission sent three officers to meet up with the source of the donation or the donor’s agent. I also mentioned on other socmed posts that the Attorney-General has every right to not indict any case that is forwarded to his office as per Article 145(3) of the Federal Constitution.

Many cry foul, till today, but could never come up with arguments based on legal facts, including (I don’t feel sorry for this) idiots who think that by being in the MACC they know everything. They simply don’t. So, let’s visit the facts.

Based on the facts above I opine that the Attorney-General had made the correct decision and everyone should give it a rest.

Now I hope someone would tell the Attorney-General to dig up this particular issue that I believe was buried by someone under the instruction of someone else: 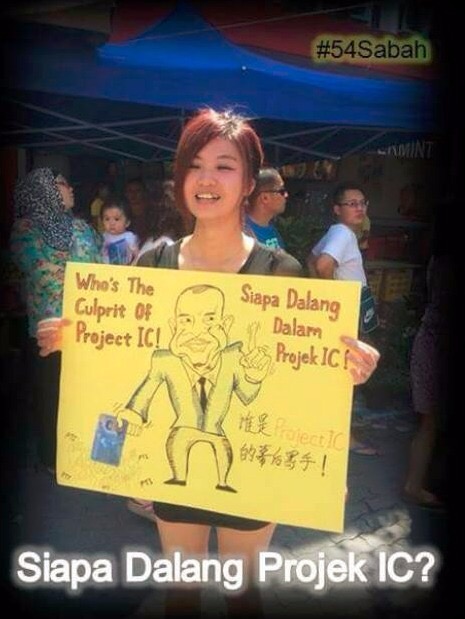 During the Emergency many Armed Forces personnel, the Army in particular, would remember how loose talks caused the death of many.

In the present day context, imagine someone from KOMTAR leaking documents pertaining to sale of lands by the Penang state government or of the channel tunnel deal.

Not that the DAP-led government cares anyway as long as money is or has been made.

Many a times raids on “massage parlours” welcomed by law-abiding citizens and housewives end up as failures because someone had leaked details of the operations to the operators.

I welcome the Attorney-General’s proposal to amend the Official Secrets Act. Many don’t realise the dire effects of having untrustworthy employee or public servants who whistleblow without giving due consideration to the course of law. Editors of the mainstream as well as alternative media would find these leaked information as a means to increase readership. There is nothing patriotic in how these editors treat the information at hand – money is the only tangible god in their world.

I don’t want to add on anymore to integrity and what-nots because it means shit for you holier-than-thou cow shit for brain people who think secrets are things that should be shared. But perhaps you would like it if official information on DAP evangelists like Teresa Kok, Lim Guan Eng, Hannah Yeoh are leaked to members of the local IS cells by officers without integrity.

Perhaps only then you would understand the need for such amendments to the law.

I found this in a WhatsApp group I reluctantly subscribes to (a friend added me into the group thinking I have all the time to look and reply to messages). It is an old message sent during the peak of Mahathir’s attacks on Najib made viral by people who read without understanding and share without substantiating. The message is as folows:

Bro what say you:

Currency is expected to go down further to RM 4.50 by end of September as Ringgit not used as currency’s for trading in world market stock exchange. Ringgit stumbled as the govt. further cut on export of crude and import more. Everyone should take precaution as this is a crashed economy as a whole. Bank Negara only held reserved of RM101 billion at this moment. Our debt climbed to 580 billion.Stop buying any properties or car. Disaster is on the way.

This is due to world negative economic outlook; World’s security issue due to terrorism – ISIS, & middle East conflict. There has been much fear on the Spartly Island; where China, Vietnam, Taiwan, Philippine and Malaysia want to claim ownership rights. The recent China & Russia military training exercise is to show their military alliance & strength. This is to tell US to lay off. Indirectly to warn US, Japan & Phillipine, do not wage war against China or Russia.

The recent crude oil crash is due to oversupply. The Americans are pumping in the world more crude oil. The reasons: i) to hurt Russian’s economy and her currency as Russian is world’s no1. Oil exporter. US & EU are blaming Russia for Ukraine’s turmoil & the unresolved MH 17 issue. ii) to stop terrorists, particularly ISIS for selling cheap smuggled crude oil from Syria & Iraq.

The world has perceived Malaysia as no. 1 in world ranking in: i)Corruption & Scandals; and ii) world’s champion in Credit Cards forgery.

So my dear friends & family members; please spend your money wisely. Keep your Money for rainy days. We are heading towards World economic collapse. The days ahead will be difficult and bumpy. The journey is tough & unpredictable. This will hit hard on All of us; regardless whether you are rich or poor. All the best to All.

Let’s take the first point: Currency is expected to go down further to RM 4.50 by end of September and our stock market will crash.

Daim’s doomsay mentioned about the Ringgit going beyond the 4.50 mark, much like the 4.88 mark when Mahathir was at the helm. In fact the highest in January we went as low as 4.43175 and this morning we’re at 4.17965. I would say it is the Dollar that has taken a but if a dive compared to the Ringgit. What about our stock market? Let’s see this Year To Date chart to see its performance:

Next point: Our debt is that 580 billion and therefore we are doomed.

Let us look at the rankings below:

The top nine above all have more than USD1 Trillion in external debts. But I don’t see Malaysia anywhere in the top nine and none of the countries above say they are doomed. Let’s go down the line further:

Hong Kong and Singapore are at number 15 also with more than USD 1 Trillion yet I see zombies on Facebook saying why is Singapore doing better than us? Going by Daim’s logic Singaporeans should be in a civil war and mass lootings by now. So, where are we then? 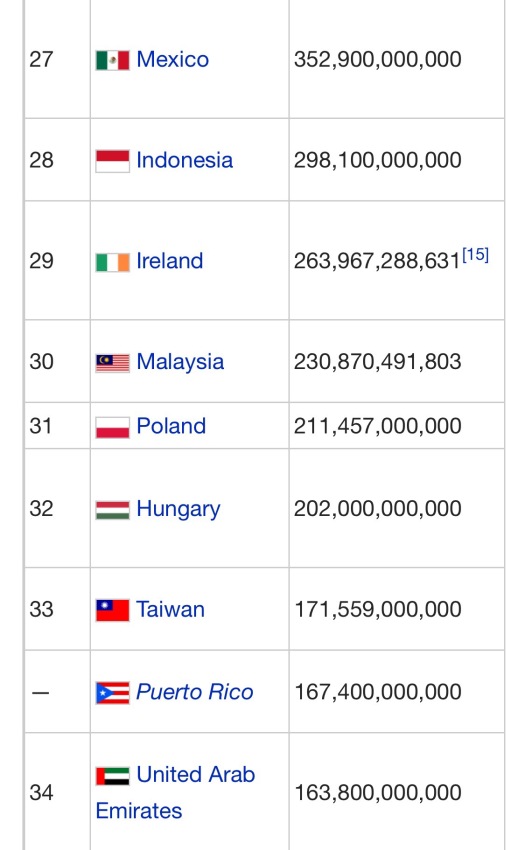 When the crunch hit us in 1997-98 Mahathir reduced interest rates to encourage spending. The more you soend the more money there is in circulation and makes the economy better. More spending creates more jobs as demand and supply fight to achieve an equilibrium. Let us look at car sales in 2015:

It looks like the financially-strapped, sand-munching Malaysians had a lot of cockle shells to buy cars! In fact, it was 666,674 cars last year! And if you don’t buy cars, Daim’s master will cry and ask for money from Najib to help his beloved Proton! So why is Dail talking cock?

Gosh! When Mahathir was the Prime Minister the navies of China and Vietnam fought sea battles. Did we suffer? No. The Spratlys have been a bone of contention for more than half a decade and as claimants get more matured and civilised, why worry? In fact all the countries mentioned have lots to lose in terms of bilateral trades should war break out in this region. Google the contracts they are bidding for and you’ll catch my drift.

Let us see what Forbes has to say about this: 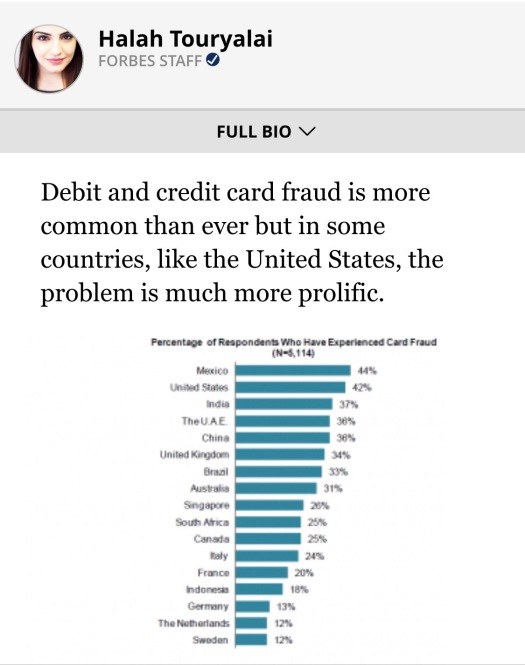 Surprise! Surprise! Do you see Malaysia there? Try looking hard and tell me if tou can find the name there. Otherwise just name me the name of neighbours of ours that you see on the list.

Next: we’re number one for perceived corruption.

It’s funny when Daim talks about corruption. Both he and his master are perceived to have benefitted through corruption. You can Google this and you will see information going back to the 1990s talking about this. Perception can never beat the truth. I can say a lot of things if I don’t have to back them up with hard facts. And this is where we stand in terms of corruption in 2015. The higher your ranking is, the less corrupted you are. 165 countries were ranked, let us see where we stand: 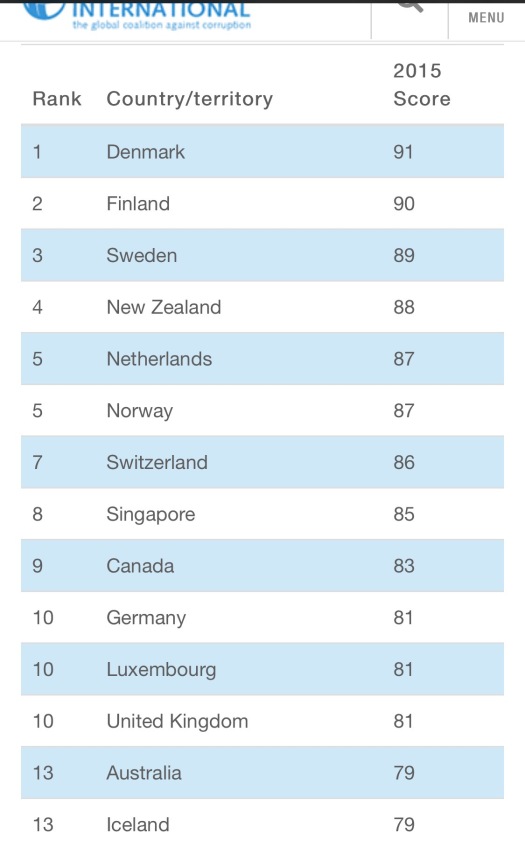 Do I need to explain the ranking above?

So when Daim wants you to save, he is asking you to make things worse. Just live within your means. Spend more in Malaysia than abroad. I know thousands can still afford  to go on holidays abroad. Perhaps Daim would prefer you save your money in his banks.