Roughly a year ago the Malaysian Anti Corruption Commission began drumming up for war against 1MDB with one goal and one goal only – to piece together selective evidences collected so there would be a corruption case against Najib Razak. As an investigator, that is how I perceive the investigation conducted by the MACC.

Recently, there has been an exposé on a certain property at No.25 Jalan Pinhorn in Georgetown, Pulau Pinang. In the words of MCA’s Tan Khai Beng:

This is the property in question: 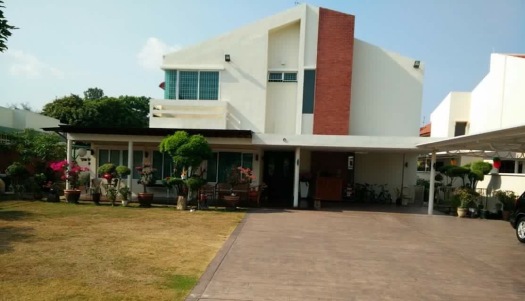 The S&P sounds VERY similar to the case of the original Mr Botox, Khir Toyo, the former Menteri Besar of Selangor who, with his cohorts, caused the serious erosion of support towards the Barisan Nasional and its subsequent virtually irrecoverable loss in Selangor in 2008. Khir was sentenced to 12 months (I wish it was years instead) imprisonment for a similar property deal.

While surrounding properties have been valued at between RM5 million to RM6 million, this particular property cost Lim Guan Eng almost a third of its value. When asked about the price, Guan Eng’s pathetic excuse was:

I don’t care so much about the property. My real concern is this:

Why hasn’t the MACC concluded the investigation into the sale and purchase of the property at No.25 Jalan Pinhorn? The investigation paper was opened in 2012 and it’s been four years already with no end in sight. I am beginning to question MACC’s apartisanship and the integrity of its officers.

Perhaps, the MACC too has a price.

Apparently in September 2015 Muhyiddin acknowledged that there is a conspiracy to topple the Prime Minister.

He also admitted that funds are administrted by the UMNO President himself.

So why has he been jumping around like an irritated monkey?