The word means hem or a fold on a piece of cloth or paper.  A Malay synonym would be ‘lipatan.’  To Lipat or to Kelepet would colloquially mean ‘to pillage.’

Malaysia Airlines has always been a favourite airline of mine.  The national flag carrier is THE symbol of Malaysia’s global reach.  However, the airline which roots can be traced back to 71 years ago has been suffering badly from an especially bad episode of mismanagement dating back from 1994.

Disguised under the New Economic Policy that was supposed to assist the Bumiputeras to be economically stronger, U-Turn Mahathir and financial henchman Daim Zainuddin selected several cronies to helm public-listed companies.  They include Amin Shah Omar Shah (who screwed up the Kedah-class NGPV programme) and Tajuddin Ramli (TR) who stripped Malaysia Airlines of its edge and finances.

TR took over Malaysia Airlines in 1994 through his company Naluri as instructed by U-Turn Mahathir and Daim, the year Jaffar Hussein resigned as the Governor of Bank Negara Malaysia after making a loss in the region of RM30 billion in US Dollars through foreign exchange gambling.

Like the collosal losses of real money the nation had to absorb through the BMF as well as the BNM Forex scandals, U-Turn Mahathir and Daim saw it fit for Malaysia Airlines, or rather their crony Tajuddin Ramli, be bailed-out using, again, the rakyat’s money.

An infuriated Lim Kit Siang (thank you again, Uncle) released a press statement on the 20th February 2002 saying among others:

The Malaysian Airlines System (MAS) police report on January 9 and the police investigations into alleged million-ringgit  management irregularities at  the MAS  cargo division during   the tenure of  former MAS executive chairman and key shareholder Tan Sri Tajudin Ramli is  a most welcome  departure from the invariable past practice of government and  corporate cover-ups, especially  in government-owned or controlled companies, making Malaysia notorious as a country teeming with “heinous crimes without criminals” – starting with the infamous Bumiputra Malaysia Finance (BMF) scandal in the eighties.

It has been reported that the alleged management irregularities centred on business arrangements between MAS and a Germany-based cargo handler controlled by Tajudin Ramli and focussed on contracts between MAS and ACL Advanced Cargo Logistic GmbH, a 60%-owned unit of Naluri Bhd., a listed Malaysian company in which Tajudin is the largest shareholder.  ACL operates a cargo facility in Hahn, Germany, that MAS in 1999 contracted to use as its global cargo hub.

The management irregularities being investigated by the police can only be  the tip of an  iceberg as MAS has chalked up colossal debts of RM9.2 billion and accumulated losses of R2.5 billion, requiring repeated billion-ringgit bailouts at the public taxpayers’ expense – and the Malaysian public are entitled to demand a  full accountability as to how the national airline could end up as such a sick company, a national embarrassment and a burden on public coffers.

It was reported that the management irregularities in the cargo division  were discovered in   an audit ordered by the government after taking control of MAS early last year  following  the scandalous RM1.79 billion buyback  bailout of Tajudin’s 29.09 per cent stake at RM8 a share when the market price was only RM3.68.

This raises the question as to why an audit was not conducted before the government’s  buyback  bailout of Tajudin’s MAS stake – which would have a very important bearing on the proper price of the government buyout.

I am sure Uncle Ah Siang has not forgotten this episode too when he became pally with U-Turn Mahathir recently.  Surely the interest of the rakyat is paramount to the God of DAP.

Or is it still?

On March 21 last year,  the then Finance Minister, Tun Daim Zainuddin, gave a long and most unsatisfactory reply in Parliament during question time to justify the buy-back bailout of  Tajudin’s MAS stake which took place under his watch, but he  failed to address or  answer the  two most important questions, viz:

The  current police investigations into management irregularities in MASkargo Sdn. Bhd. have again brought to the fore  the  questions concerning  prudence, propriety, responsibility,  integrity, accountability and transparency of the decision to use RM1.79 billion public funds for the buy-back bailout of Tajudin’s MAS stake.

Last month, the government announced a RM6.1 billion MAS restructuring exercise involving assets sale to enable the national carrier to retire some of its debts and provide RM820 million as working capital, which is just a creative way for a second round of government bailout for the national airline.

Malaysia Airlines, Perwaja, Renong as well as other companies steered towards oblivion by their cronies had to be bailed out using the rakyat’s coffers, and not one person has ever been charged in a court of law for the breach of trust they committed.  This included Amin Shah Omar Shah who, prior to being given the contract to build our Navy’s vessels, had never built a single fishing boat!

Kit Siang the self-proclaimed rakyat’s champion as recent as 2012 stated in the DAP’s mouthpiece Roketkini that Mahathir cannot pretend to be ignorant of the MAS scandal.

In fact it as also reported that “Mahathir had his hand in getting Petronas to bail out his son Mirzan Mahathir’s shipping company, then Konsortium Perkapalan, which had trouble servicing US$490 million debt!”

Lim Kit Siang was so furious about the bailout of Konsortium Perkapalan using the rakyat’s money that on the 16th June 1998 he wrote:

But Mahathir should similarly give full co-operation to the Royal Commission of Inquiry into Nepotism, particularly as to whether there is any nepotism in the government, through Petronas, using hundreds of millions of ringgit of public funds to bail out Mirzan Mahathir’s Konsortium Perkapalan Bhd.

Just recently, a copy of a directive from the Ministry of Finance to Telekom Malaysia regarding a direct negotiation contract award totalling RM214.2 million to Mukhriz Mahathir’s OPCOM made its rounds on the Internet: 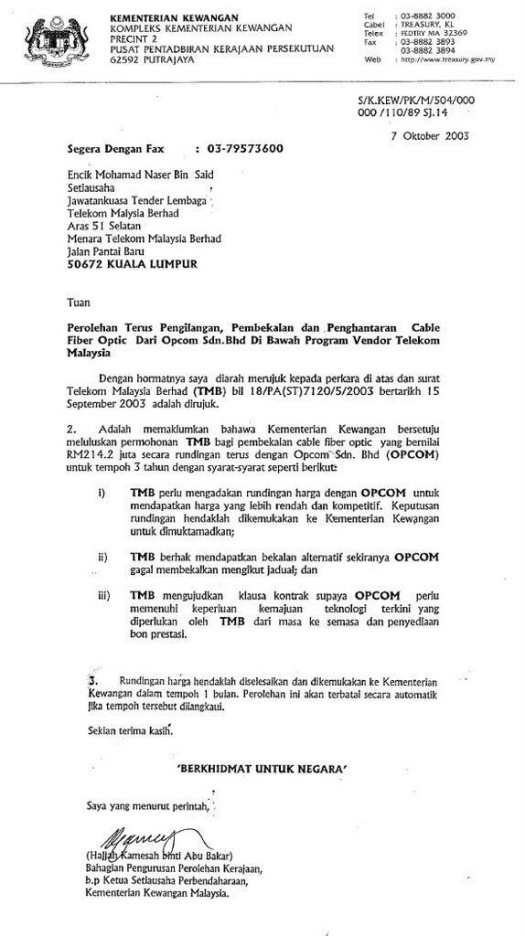 A blog post by a Sup Torpedo wrote about this back in 2006:

Mahathir’s criticism of Scomi is justified. It has proved that Scomi does not garner very much government work and now that’s all open to scrutiny. Unlike a company called Opcom Sdn. Bhd. who had a direct nego approved by the Finance Ministry way back in 2003 when Mahathir was both Prime Minister and Finance Minister. The amount of the tender by Telekom Malaysia Berhad was two hundred and fourteen MILLION ringgit. The Ministry of Finance approved it, no doubt with the blessing of the then Finance Minister and Prime Minister, Tun Dr. Mahathir Mohamad.

Hey! What’s new?  If you look at the above letter, it was dated on the 7th October 2003.  The old fart stepped down as the Prime Minister and the Finance Minister on the 31st October 2003.

It was an eleventh-hour effort to enrich his kin – a true nepotistic egoist dictator who was afraid that money made during his 22-year dictatorship would not be enough to cover his grave.

Even in 2006, during the peak of the old fart’s attacks on his successor Abdullah Ahmad Badawi, observers such as Sup Torpedo could see that it was little about putting the interest of the rakyat ahead as compared to securing money for the Thousand-year Reich of his:

Don’t miss the wood for the trees. This fight that Mahathir got going on with Pak Lah is not about doing the right thing. It is at best about putting his old crony’s rice bowl firmly where the padi fields grow. At the very worst of motives might be the will to further advance Mukhriz’s political career and provide continuity to the old ways.

Again, what is new now? Virtually nothing, except for one little glaring fact: WHY IS UNCLE KIT SIANG SELLING HIS SOUL AND PUTTING HIS PERSONAL POLITICAL INTERESTS AHEAD OF THE RAKYAT’S BY MAKING A U-TURN ON HIS ATTACKS ON MAHATHIR?

A simple answer would be that he is nothing but the stinking, arrogant cow-dung for brain hypocrite he has always been.  Power is what he seeks for power ensures riches, just like his charged-for-corruption son.

And what of the rakyat then?

As the saying goes: “The meek shall inherit shit.”