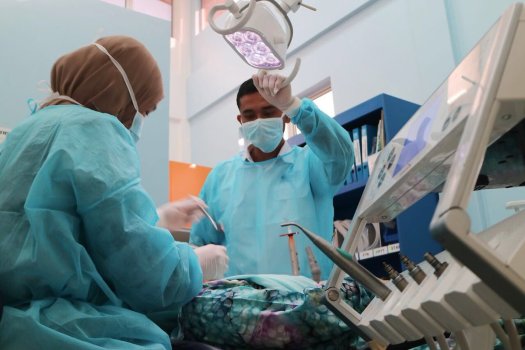 Among the more important aspects of welfare that the government has to look after without fail is healthcare.  Fortunately, public healthcare in Malaysia already has a good foundation.  The only thing that needs to be done is for it to be better enhanced.

Among the issues that has to be addressed is of the issue of the glut of medical practitioners in this country.  Every year, about 5,000 new doctors are produced, including 1,000 from overseas universities and colleges.  The problem now is that these new doctors have to do two years of housemanship in government hospitals before they can be recognised as general practitioners.  The problem is, government hospitals could only take in 10,000 housemen at any one time.  Therefore, new doctors would have to wait between eight months to a year before they could do their housemanship.

Health Minister Dr Dzulkefly Ahmad’s recent announcement that the Klinik 1 Malaysia will be enhanced by locating doctors and proper drug-dispensing units could help the situation.  Not only that, it would alleviate the congestion that we see at almost all Klinik Kesihatan on a daily basis.  There are 196 Klinik 1 Malaysia currently operating on a 24-hour basis manned by an Assistant Medical Officer and nurses.  Having at least twelve doctors doing three eight-hour shifts would allow for more medical graduates to be absorbed.

If the financing mechanism could be formulated, the Skim Peduli Sihat nationwide extension could also help private clinics, especially those in the urban and suburban areas whose business is affected by the presence of Klinik 1 Malaysia.  The idea is for the B40 group to be able to seek basic healthcare at private clinics for RM500 per family per year, or for individuals above the age of 21 earning above RM1,500 a month, RM200 per person per year.  This would certainly help private clinics and help alleviate the congestion at Klinik Kesihatan.

I certainly hope that the government would roll these initiatives out soon.  The government must be seen to be serious in making reforms, and not look back and blame the previous government.  Pakatan Harapan is now the government and has all the means to improve the situation.  For now, Dr Dzul is on the right track.  I hope he would be able to move forward with healthcare reforms.

One Reply to “Hoping For Better Healthcare”