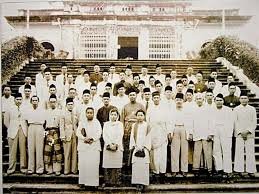 It has been more than a month since UMNO’s disastrous show in its history of general elections. Although as an individual party UMNO has the most number of parliamentary seats won, it effectively controls two states – a far cry from the grand old party it once was.

I sense nothing but trepidation in the first few weeks after the general elections when one by one government institutions come under “reforms”, and then the attacks on the Rulers Institution, namely the institution of the Yang DiPertuan Agong. Hardly any word came out from UMNO’s leadership save for those that came from the normal members.

The strong hands that led to the resignation of two of our nation’s top judges also did not result in strong rebukes from UMNO despite it being a direct interference by one instrument of His Majesty’s government into another.

Of course I am of the opinion that the two top judges are also idiots for caving in and resigning as demanded. It was their job to show the independence of the judiciary and to protect the integrity of their institution, yet they failed miserably to show the example of stewardship to their subordinates as those in charge of that institution.

UMNO is a far cry of what it was back in the late 1970s, let alone what it was in 1946. Losing its power to govern also means that UMNO no longer enjoys the facilities that come with being a government. There have been members who left the party for the other side just because funds are no longer readily available as it was prior to May 9.

Branches find it difficult to hold their annual general meetings because the community halls are no longer available to them. Furthermore, they do not receive sufficient funds to hold their meetings at hotel meeting rooms. They have never had it this difficult and have no institutional memory of how it was before 1981 and Malaysia Incorporated. Members simply do not have the same fighting spirit possessed by their forefathers. What has happened to the ‘unity is strength spirit?

Furthermore, branches were set up without actually soliciting the support of the local residents. You can find that many of the branches are filled with people who are not from where the branch is actually located. How can these people understand the local issues? Branch leadership pays the annual membership fees for fear of being deregistered. How many UMNO members actually go to their respective branch to pay their annual dues?
Which is why at every UMNO General Assembly the Secretary-General would read out the number of UMNO members to-date, not realising that those are false numbers. It would have been almost impossible for UMNO to only get 2.55 million votes, including from non-UMNO members when there are 4 million members!

When the President was attacked from outside and within the party three years ago, hardly anyone stood up to defend him save for a few like Rahman Dahlan, Salleh Said and Ahmad Maslan. There was no ‘defending of the institution of the President’. It was every man for himself. I am of the opinion that members are to defend the leadership of the party when attacked, and change the leadership from within if needed.

How many division actually hold sessions with all members to explain about party policies, how to handle current critical issues after each general assembly? How many members who represented the division members actually attend the general assembly to listen to the speeches and proposals put forth by each state, instead of wanting to get as close as possible to personalities trying to push proposals or hand business cards to them?

There was very little done by UMNO divisions and branches to win the hearts and minds of the community they were supposed to represent. I only see programmes done for their own members.

On the federal level, you see more of UMNO members and members of the BN component parties attending ministerial events than from members of the local community. I chanced upon an event attended by a former federal minister who was lending support to a BN parliamentary candidate in one of my rounds to gauge the election temperature. Of the hundreds who attended, perhaps only a handful – less than 100 were from the local community. The rest were those who were following the former Minister, members of the RELA, police, local council and government officers from an agency the former Minister presided. You cannot gauge how much do the locals actually like the candidate because they were swamped by these extras.

UMNO is also famous for having one-off self-gratification programmes – blood donation, voters registration, skateboarding, free car wash. Unlike with the DAP, there were no follow-ups, no explanation done on why voters should be voting for BN, what a BN victory would mean for the voters.

UMNO’s information machinery at the branch and division levels was also absent. I have never seen any UMNO ‘ceramah’ at any kampung except during by-elections and general elections. Now that UMNO is the opposition, where is this machinery? It has been one month but everyone seems to be busy eyeing for party positions. Pakatan was already at it the moment the results of the previous general elections came out, and they never stopped.

UMNO needs a total overhaul and improvement in terms of mind-set, approach and its constitution. It needs to look at how PAS conducts itself as an opposition party, and its consistency.
In its party elections delegates would have to forget nostalgia. Some have not moved on from the ‘Najib Days’. Wake up. Najib is gone. He has stepped down. He may have been the best Prime Minister and party president but his branding failed. There is no point reviving that.

Instead, UMNO needs to look forward and have an approach that is outside the box. Vote for different people to do different things. The party president should not also be the person who is the Prime Minister-designate. The Prime Minister-designate should also not be the parliamentary Leader of the Opposition. UMNO would be better run if these three people are different people altogether. And top party offices cannot be held for more than two terms.

UMNO also needs to open up to members of other races – not necessarily as members, but members of an appendage: Friends of UMNO, who cannot vote in party meetings, but can run on UMNO ticket during elections. After all, UMNO used to have non-Malay members. PAS has been successful with this approach. There are so many BN-friendly non-Malays out there who do not want to be associated with the other BN component parties (there are only four BN parties left) but support the BN concept.

Talking about membership, UMNO should also allow for direct memberships, approved only at the headquarters level. This would allow for young professionals to join the party without being blocked by branch or division heads. And do away with the quota system if it is still there. As long as a member gets one nomination from a branch (or division for a national-level post), he or she should be eligible to run for any post in the division.

If UMNO is serious about making a comeback, it needs to forget the form it morphed into after 1981. It needs to evolve, incorporating the non-Malays for support, have its leadership subscribe to more accountability. Most importantly it needs to embrace the spirit of 1946 and have members who would not mind sacrificing for the party without ever expecting anything back. It needs to have hundreds of its own Rafizis without the negative aspects, and an information machinery that is aggressively going out there to win the hearts and minds of the masses. UMNO has to become a constructive opposition, with real professionals running and representing the party.

Until then, it can just dream on and wait for another 61 years.

(This article was first published by The Mole)