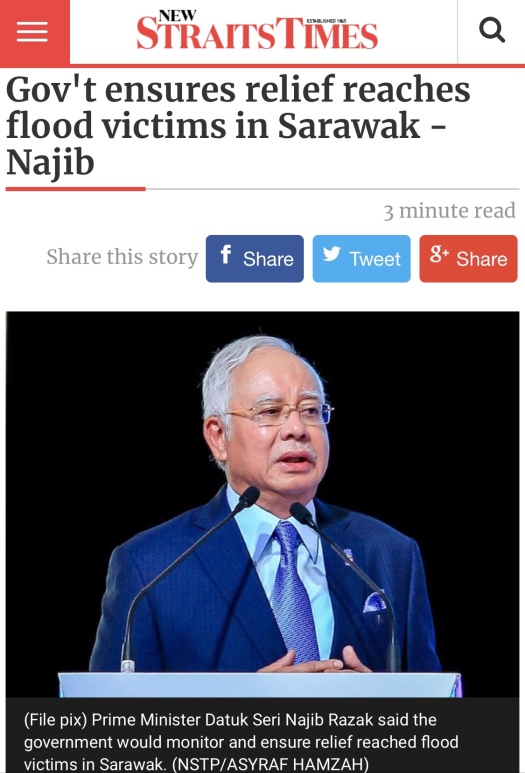 I see several Sarawak-related pages claiming that no one, including the mainstream media, cares or has given coverage to the flood situation in Sarawak.

Comparing the response both the government and non-governmental organisations gave to the floods on Kelantan and Pahang to the ones now in Sarawak, the Sarawak-related pages say that there is very little that is being done by the Federal Government.

All Federal Government agencies in Sarawak have been put on flood watch standby as early as December 2017. This includes, but not limited to, the Army 1st Division, the Royal Malaysian Police (PDRM), and the Fire and Rescue Services Department (FRSD).

The FRSD has been evacuating people from flooded areas, and in one particular instance, evacuated Suriah Bakar, 35, of Kampung Parong, Kota Marudu, who was in labour.

Prime Minister Najib Razak himself is constantly monitoring the flood situation in Sarawak and has promised to ensure that relief reaches all flood victims.

As at noon today (Thursday 8 Feb 2018), only five areas in three divisions in Sarawak have recorded water level above the Alert level. They are in the Miri, Bintulu and Kapit districts.

The areas that are affected by the floods are Samarahan. Sarikei, Sibu, Serian, Bintulu, Mukah and Limbang.

While the Borneo Post has been actively updating the flood situations in Sarawak, Sarawakians complain that the Peninsular-based media, especially the electronic media, have not been giving ample coverage.

This is absolutely not true. Just yesterday I pointed to a Sarawakian friend URLs of mainstream media reports on the flood situations there, including the ones by NST, Berita Harian and Utusan Malaysia.

BERNAMA and RTM have been airing the plight of Sarawak flood victims. Even the station most hated by the Opposition, TV3, has been consistently reporting on the flood situations in Sarawak, covering flood relief centers as well as the latest evacuation operation this morning by the Civil Defence Force (APM) involving a woman in labour at Klinik Entabai, in Julau, Sarikei.

As far as social media is concerned, there is very little that the ordinary Semenanjung folks can do. While we can start collection centers here, sending stuff over there would not be economical at all.

Whilst there have been many flooding in the Peninsular, I made myself available for three – the Johor floods of 2006-2007, the Pahang floods of 2013, and the Kelantan floods of 2014. Those were the flood disasters that Peninsular people got together and helped government agencies to provide assistance to flood victims.

In Johor, I provided assistance between Parit Botak and Rengit. In Pahang, I assisted Her Highness the Tengku Puan Pahang in the Kuantan and Pekan areas. In Kelantan, my former classmates and I brought supplies from Putrajaya to the hospitals in Gua Musang, Kuala Krai and Jeli.

In 2014 Kelantan, more than 170,000 had to be evacuated. The scale of destruction that I saw with my own eyes in Gua Musang, Manek Urai and Kuala Krai was just beyond comprehension. Even Kuala Muda in the aftermath of the 2004 Tsunami did not look as bad. Yes, I was there too in 2004 with a Malaysia Airlines aircraft captain friend (he now flies for Air Asia).

I took the above photo at Kampung Bukit Tebuk near Chiku while on the way from Kuala Krai to Gua Musang on 31 December 2014 because I saw this man at the Manek Urai relief center queuing for food for his family earlier in the morning. At this point he had walked 14 kilometres to get home.

Pulau Pinang in November 2017 saw 71,294 people evacuated. This was when Lim Guan Eng was seen crying for help…literally.

In comparison, the total number of evacuees in Sarawak as of last night was 4,859 people. It is a number that is still very manageable by the state government and its NGOs.

I have not seen any NGO in Sarawak running a donation campaign to collect cash and kind for flood victims there. If there is such a fund I am sure people in Malaya (a term fondly used by Sarawakians for Peninsular people which isn’t a nice term) would be glad to chip in. After all, I have relatives in Samarahan, Kuching, Miri, and friends working on the Pan Borneo Highway project that are affected by the floods.

Nor do I see throngs of 4X4 vehicles (which happens to be in abundance in Sarawak) carrying relief items to affected areas like it was done in the Peninsular.

How can anyone start anything if the Sarawakians themselves don’t do anything for fellow Sarawakians? I promise not to ask how many Sarawakians actually donated to flood victims and relief missions in Kelantan, Pulau Pinang, Johor and Pahang. To where should we Malayans send our donations to?

So, the feverish pace you saw in the Peninsular was because of the magnitude of the floods and the destruction they caused. The absence of any social media hype by socmed practitioners in Sarawak on the flood situation says all that.

I am not saying that the flood situation in Sarawak is not bad. Any flood is bad. But it doesn’t do justice when people sit and complain about it on social media expecting to be spoon fed. Just start something instead of whining. There are many here on this side of the South China Sea who would want to help.