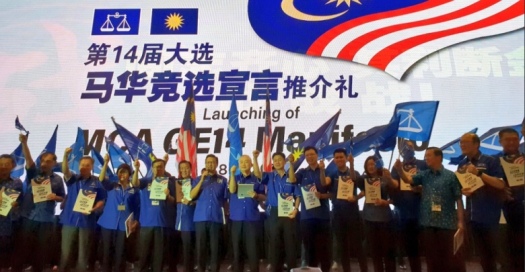 I don’t know what prompted the Malaysian Chinese Association (MCA) to go it all alone in the recent Balakong by-election.

Perhaps, it did not want to be seen as an Umno lackey as it had always been labelled as. But this was the first time that it had contested under its own party logo since the first general election in 1955.

As we can now see, there is a general lethargy among the masses in respect of politics.

We have had three by-elections since the downfall of the Barisan Nasional government and the turnout during the by-elections have been rather poor.

On the 87th day, the Sungai Kandis by-election saw a drop of 18,476 voters compared to the numbers during the 14th general election.

Umno had initially wanted to contest using its own logo but changed its mind. Under the BN banner, the Barisan Nasional saw an 11.49 percent swing compared to 5.84 percent for Pakatan Harapan.

Umno was helped by Parti Islam Se Malaysia (Pas) although the latter still showed a certain amount of distrust towards the former.

In the Seri Setia by-election which was held 22 days after Pakatan Harapan’s failure to fulfil its election manifesto promises, Pas saw a 31.01 percent swing for the party, helped by the fact that BN did not contest but assisted Pas during the campaign period.

Pakatan saw a swing 8.02 percent votes against it. The majority was reduced to 4,027 compared to 19,372 during the 14th general election.

MCA, which contested under its own banner against Pakatan, saw a swing of 4.11 percent for it compared to Pakatan’s 7.46 percent.

This means that even with a very much reduced turnout (49.16 percent of the total turnout during the 14th general election), MCA had failed to make a significant impact on the voters.

The philosopher, Jorge Agustín Nicolás Ruiz de Santayana y Borrás or George Santayana, once said that those who do not remember the past are condemned to repeat it.  In this case, the MCA had forgotten its own history.

Before the independence of Malaya, both the MCA and Umno were political enemies.  There was already a feeling of discontent among the Malays in the pre-war period over their poor economic position vis-à-vis the Chinese and Indians.

Professors T.H Silcock and Ungku Aziz noted in 1950 that the Malay peasants and fishermen were dependent on Chinese middlemen while Malays worked as messengers in offices where Chinese and Indians were clerks.

However, Umno knew that in order to achieve independence, a long-lasting relationship with other races needed to be forged. It was during the Umno general assembly of 1949 that Onn Jaafar said,

“It is absolutely important for the Malays to obtain closer ties with the other people in this country.  It is time for us to take the wider view than the kampung view. I ask of you, which will you choose, peace or chaos, friendship or enmity?”

Although the grassroots of Umno was against Onn Jaafar’s idea that led him to leave the party two years later, it opened up a door for both the MCA Selangor Branch and Kuala Lumpur Umno branch to work together in the Federation’s first local elections.

Both Umno and MCA competed against each other and against other parties in Pulau Pinang in December 1951.

MCA had only managed to obtain the support from the Chinese while Umno the Malays. It was Datuk Yahya Abdul Razak from the Kuala Lumpur Umno branch who approached Selangor MCA branch chairman, H.S Lee to discuss the possibility of a cooperation of the two parties.

In January 1952, both branches of the two parties announced that they were jointly-contesting the Kuala Lumpur elections.

This alliance went on to win all but one seats in the 1955 general election.  The rest is history.

In the past, MCA relied on the English-speaking, urban-dwelling portion of the Chinese community who make up about 10 percent of the seven million Chinese people in this country.

MCA now needs to go down to the rural ground to try and win the voters back.

There is no way that the MCA can do this all alone by itself. It still needs Umno, MIC and even Pas to help it make a breakthrough.

This can only come about with a rebranding of the approach, and the fight for a common good, with the protection for all races remaining intact.

(This article first appeared on The Mole)