The first rail line was opened in 1885 running between Port Weld and Taiping.  The line to the east coast running between Gemas and Tumpat was only completed in 1931, by passing major towns such as Kuantan, Kuala Terengganu and Kota Bharu.

For decades after that there was no real growth in terms of communications in the east coast.

Najib Razak changed all that.

Phase 3 of the East Coast Highway which will terminate at Kota Bharu will commence during the 11th Malaysian Plan (2016-2020), as well as the East Coast Rail Link, a new rail link cutting through green fields.

The first phase will see the Klang Valley connected to Kuantan, Kuala Terengganu in the second phase and Kota Bharu and Wakaf Bharu in the third and final phase. 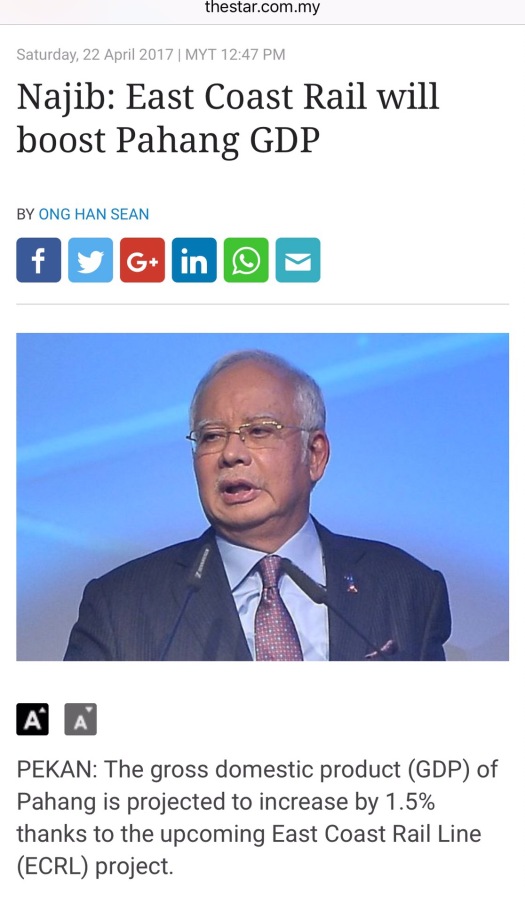 Announcing at the handover ceremony of the Ganchong Water Treatment Plant, he said that the GDP of the state of Pahang would increase by 1.5 percent when the ECRL comes online.

The Opposition as usual is opposed to anything that is good for the people if it comes from the government.

PAN’s Mujahid Yusof Rawa, for instance, questioned how it will benefit the local economy – and you do not need to be a member of Parliament let alone a rocket scientist to figure out the answer.

The ECRL will act as a land bridge for goods coming from the west coast going to especially Shenzen in China through Kuantan port, and similarly goods from the east coast get sent to the Middle East and India through Port Klang.

This land bridge would also allow goods from the eastern part of the globe be sent to the western part through these two ports without having to circumnavigate the Singapore strait.

This cuts down the over-reliance on the Strait of Malacca. Today, more than 80 percent of China’s energy needs pass through that narrow waterway.

So if you imagine it takes just four hours for goods to be transported by a lorry from Kota Bharu to Port Klang using the ECRL as compared to seven hours using the Gua Musang way or nine hours via the East Coast highway, you would be able to imagine the kind of economic growth the east coast states would stand to benefit from the ECRL.

No longer would SME or heavy industries have to be centred in the Klang Valley where the costs of land and living are far higher compared to in Kelantan and Terengganu. More jobs would be created and the luxury gap lessened tremendously.

The time for goods to be transported from Shenzen to Port Klang would be 30 hours lesser than having to sail them around Singapore.

“Cost issues aside, this new network will create new alternative routes to boost trade for Asean, with Malaysia as the base; and why this has to be taken seriously is because the Chinese have a direct interest in the (Kuantan) port and the rail link,” said Mr G. Durairaj, managing director of maritime and logistics consultancy PortsWorld.

Already Kuantan port is home to several petrochemical companies such as the BASF-PETRONAS Chemicals.

The port has also attracted RM8.9 billion worrh of investments including a RM3.5 billion steel facility.

The integrated steel mill will occupy a 287ha site – half the size of Singapore’s Sentosa island – and have an annual production of 3.5 million tonnes.

Imagine the size of investments that the ECRL could bring into the east coast states. Would you now question the benefits the ECRL would bring?

One Reply to “Real Growth For The East Coast”