This morning I was labelled a ‘Malay supremacist‘ by two non-Malays on Twitter for presenting my views on the Syariah Court (Criminal Jurisdiction) Bill to be proposed by PAS President Haji Hadi Awang.  They claim that I was trying to push my idea to them but at the same time ignore the fact that they were pushing their views to me for me to accept.

Then, I saw this on The Star and cannot believe my eyes that this is being said by our very own lawmakers!

Imagine our lawmakers, all born before Malaysia was formed, do not know that the two legal systems have been in place even before 31 August 1957, and was adopted into the Federal Constitution of 16 September 1963 when it was accepted by both North Borneo and Sarawak that entered a Federation with the other states of Malaya to form Malaysia.  The Federal Constitution even says that the Attorney-General does not have any jurisdiction over Syariah matters – clearly drawing the line between the two systems.

I have written at length on this matter prior to this.  Please refer to the following:

The fear came about when Kelantan state assembly passed its Syariah Offences (II) Enactment last year that includes crimes of theft, fornication and so on prescribing the amputation of limbs, stoning et cetera.  Since the punishments prescribed are ultra vires in nature, Hadi Awang sought for the amendments to the Syariah Court (Criminal Jurisdiction) Act, 1965 (Act 355), dubbed by the uninformed as the Hadi Bill or Hudud Bill.

Citing the Bill as unconstitutional, the ill-informed began to attack the Bill at its earliest stage; while the Opposition uses it to mount attacks on UMNO for supporting the proposal to be tabled in Parliament, conveniently forgetting that the Federal Constitution is the supreme law of the land.

What Can Hadi Propose?

The following is the list of items that Hadi can seek amendments to: 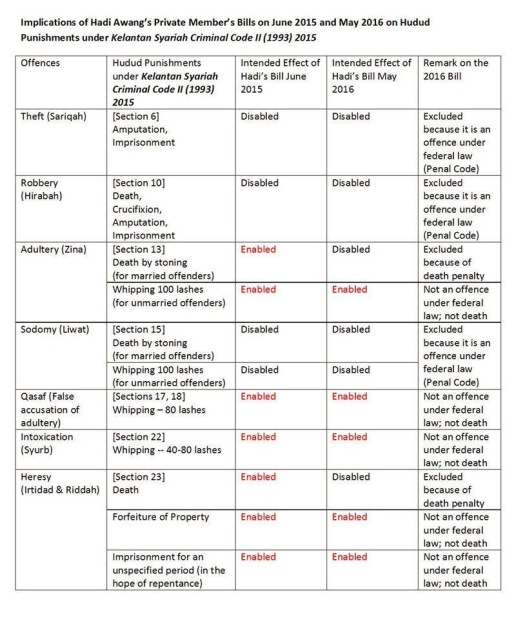 Only the ones in red (Enabled) are the ones Hadi Awang could hope to propose in his Private Bill.

Does The Bill Affect Non-Muslims?

Like I mentioned, the two legal systems have co-existed in Malaysia since the formation of Malaysia. Let us see Section 2 of the Act:

And did Hadi Awang seek to include the non-Muslims in his amendments?

So, no. Whatever you say or think, this law DOES NOT APPLY TO NON-MUSLIMS!

THIS LAW WILL PROMOTE DOUBLE JEOPARDY AND IS UNCONSTITUTIONAL

Have you no brain?

Hadi Awang merely seeks to increase the penalties, not expand the jurisdiction of the Syariah court!  As per the table above, all offences covered by either the Penal Code or by any other law that was made under the ambit of the Federal Constitution cannot be charged under the Syariah law.

How Is The Process Now? What Does Hadi Awang Have To Do?

Any Member of Parliament not representing the ruling government who wants to table a Private Bill will have to apply to the August House for leave to do so. At the same time the said MP is to submit the Bill with an explanatory statement of reasons and objectives of the Bill.

Every such application will have to be in the form of a motion. Only when the House agrees with the motion will the Bill to have been deemed as being read for the first time.

There are more stages and hurdles for the Bill to have to go through before it finally makes it as an approved Act, or thrown into the bin.

We are now still at the first stage – the application.

What Else Does The Federal Constitution Say About Each Other’s Religion?

We have Article 11(3)(a) in our Constitution which states:

Every religious group has the right to manage its own affairs

By intruding, isn’t this right given also to the Muslims in Malaysia being denied by the non-Muslims? Remember, Islam is the religion of the Federation and others are given the rights to practice theirs in peace and harmony.

So, why intrude into our affairs?

Back in 1998 after Anwar Ibrahim was sacked from UMNO and the rakyat rose against Mahathir, I used to tell friends who were in UMNO that it was wrong to burn your house down just because you quarrel with a sibling.  Instead, you should sit down with that sibling and other family members and work out the differences and find a middle ground.  Last night, Najib Razak who is UMNO’s President made the same call through his Facebook posting asking UMNO members to work differences out amicably. As members of a large family there is bound to be disagreements but this could be solved through discussions as UMNO members are brethren.

This is of utmost importance.  UMNO has gone through many trials and tribulations from the days of Dato Onn Jaafar who left the party to form another back in the 1950s, to the attacks on UMNO by a nonagenarian of Kerala-descent that the party faces now.  It has been the unity of UMNO members that has stopped all attempts to break it apart.  The UMNO members have to realise this.

UMNO is not just being attacked by its trditional enemies and former members.  It is also being threatened by colleagues from component parties for showing ‘support’ to the amendments to the Syariah Court (Criminal Jurisdiction) Act, 1965 sought by PAS President Haji Hadi Awang.  It was last revised in 1988 and since its passing 51 years ago, not a single non-Muslim person has ever been charged in a Syariah court for not fasting during the month of Ramadhan nor has there been any case of a non-Muslim being charged in court for fornication.  So why should it be any different now?

Talking about unity, someone caused disunity in ASEAN 19 years ago when he fought to have Myanmar admitted as a member. Yes, Myanmar became a member of ASEAN despite concerns regarding the military junta’s treatment of Aung San Suu Kyi as well as the oppression of minorities.

Mahathir said:  “I fought hard for Myanmar to be admitted into ASEAN.”  Yes, it was his idea.  According to his now-bosom-buddy Lim Kit Siang in June 2005, it is Mahathir who must bear the greatest responsibility for the ASEAN admission of Myanmar in the 1997 ASEAN Summit in Kuala Lumpur despite strong regional and international reservations and opposition. It was Mahathir who was a staunch supporter of ASEAN’s founding principle of non-interference, a principle that has allowed the group to develop economic ties without being pulled into each other’s domestic problems, that has caused this policy to be severely tested when Myanmar entered into ASEAN in July 1997.

In June of last year he tried to push the buck back to the present government.  For those who said that Najib Razak has done nothing to help the Rohingyas, due to the ASEAN principle of non-interference, the most the government could do is to get Myanmar to be committed in dialogues with other neighbours on this issue. Despite that, this present government shipped 480 tonnes of food, neccessities to the Rohingyas in Myanmar in September 2012 through the port of Sittwe, Myanmar. And last year, Najib Razak announced that Malaysia will give assistance to the Rohingya boat people. The Royal Malaysian Navy led the effort to give assistance to the boat people.

Since Mahathir is jobless, can’t afford to hire cooks, can’t afford to buy flight tickets that he needed a private jet to take him everywhere, and his Vision 2020 to have his son as the Prime Minister is now in tatters, Mahathir should now organise a series of demonstrations in Yangon.  I am pretty certain his DAP friends would be willing to finance his trip there.

Let us see if he would take up this challenge and prove that he is still a negarawan and not the negarasawan that he has turned into.