Kay Kiang is a Hokkien term to describe someone who acts smarter than he really is. So Lim Kit Siang is actually Lim Kay Kiang.  His parting shot for Friday’s Twitter was to ask Najib Razak about an allegation that RM9.5 million was paid to Shafee Abdullah who was prosecuting for the government in Anwar Ibrahim’s Sodomy 2.0 trial.

The allegation was made by Sarawak Report which said that two payments were made by Najib Razak using 1MDB funds from an Ambank account.

I shall not comment about the status of the accounts mentioned by Lim Kay Kiang. I shall let others handle that part.  This is typical shit-stirring by Lim Kay Kiang who has turned a blind eye on his son Chao Ah Beng’s corrupt practices.  Chao Ah Beng, who is a quintessential Ah Beng said that he will fight to the end to clear his name has been delaying his own trial to play for more time.

What Lim Kay Kiang ought to realise is that firstly, no matter the amount that was paid to Shafee, the money could not have come from 1MDB.  Even Pakatan-mouthpiece Malaysiakini said that the money had been transferred out of Malaysia the day the account that held the money was closed – 30 August 2013. 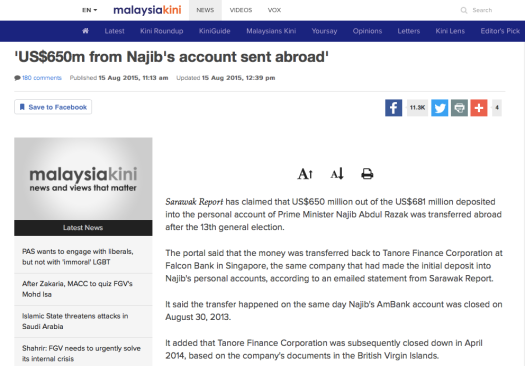 Secondly, Shafee was the prosecutor for the trial. You can pay him all the money available in Malaysia but the verdict and judgment rest on the trial judges.  Therefore, what effect does paying Shafee have on the outcome of the trial?

The money that was received by the account bearing Najib Razak’s name was for UMNO.  Whatever amount that was not used was transferred out of the country.  I am sure that there is nothing wrong with receiving funds for political purposes, to make the country a better place.  If you don’t believe me, you can ask Pony Tua who is the DAP’s chief mischief. 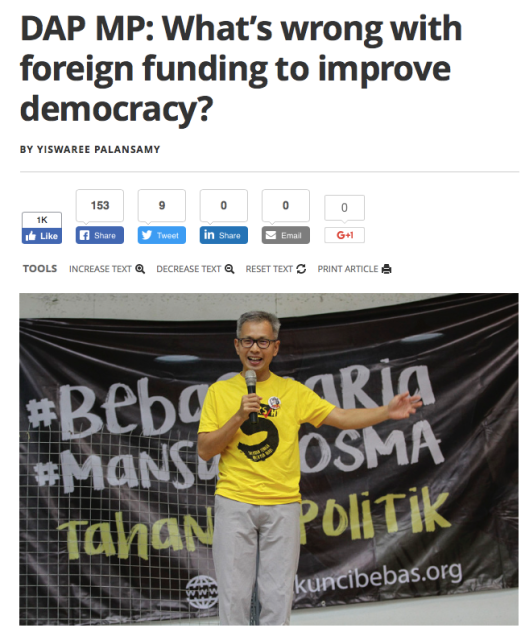 Perhaps Lim Kay Kiang should ask Pony Tua what he meant by “What’s wrong with foreign funding to improve democracy.”