What everyone fears most is for the Malays to unite.  I wrote this a few months back.  All the lawmakers know that the RUU355 amendments have no impact whatsoever to the non-Muslims, and even if all the Muslims MPs from both PAS and UMNO were to vote for the amendments, they will never attain the 2/3rd majority required to pass the bill for it to go to the next stage.

Which is why the Malays in the DAP, PAN, PKR and Pribumi are the tools for the DAP leadership to use, as in the words of Superman Hew, “to screw the Malays using the Malays.”

Objections are raised using mainly the Malay tools.  The screen-capture of a Twitter conversation between a BERNAMA journalist and a PAN MP is the evidence to that.

But the resistance towards it is mainly to avoid the provision of an opportunity for Muslims and Malays to unite just before the next general elections.  They oppose just for the sake of opposing.

And then in comes the individuals who do not see or understand that in Islam, protecting the rights of a community supercedes the rights to protect an individual’s rights, nor understand the separation of jurisdiction between the civil law and Syariah law.

This dual system of law first existed in the Malay states in Perak in 1807 with the introduction of the Royal Charter of Justice of 1807 in Pulau Pinang.  Prior to that, laws based on the Syariah has been the lex loci of this land.

Islam first came to this land in the ninth century A.D and flourished in the 13th century, 200 years before the kingdom of Melaka was founded. The first evidence of a coded Syariah law was from the Terengganu’s Batu Bersurat, written in 1303, a full century before Melaka.

The kingdom of Melaka produced two major legal digests, which formed the main source of written law in Melaka – the Hukum Kanun Melaka , and the Undang-Undang Laut Melaka .  The Hukum Kanun consists of 44 chapters, which touched upon matters such as the duties and responsibilities of the Ruler, prohibitions amongst members of society and penalties for civil and criminal wrongs and family law.  The Undang-Undang Laut consists of 25 chapters, which covered maritime matters, such as the duties and responsibilities of ships’ crew, laws pertaining to voyages and trade.  The law contained in the above written codes are said to be based on Islamic law of the Shafie School, together with elements of local custom.

Melaka’s written codes were responsible for the growth of other written codes in other states of the Peninsula: Pahang Legal Digest 1595, the laws of Kedah 1605, the Laws of Johore 1789, and the 99 Laws of Perak, 1878.

Therefore, the question of the Syariah creeping into the lives of the Muslims of the land does not hold true.  The reverse however is.  The RUU355 is not about amending the offences but merely seeking the agreement to enhance the punishments to be meted out for the offences.  And as explained in previous writings as per clickable links above, the Federal Constitution is the supreme law of the land and therefore offences already covered in the Penal Code as well as in other civil laws made canoot be tried under the Syariah laws of Malaysia.

Furthermore, the separation of jurisdiction of the legal systems provided by the Constitution also ensures that the rights of non-Muslims are protected – only Muslims can be subjected to the Syariah law.

On the question of the Muslims being subjected to dual laws, this is not a problem. If a Muslim commits theft, he will not get his hand amputated in Malaysia.  Theft is an offence under the Penal Code and therefore the Muslim offender gets punished according to what is provided for by the Penal Code.  The punishments that the Syariah court can mete out cannot go beyond the Second List of the Ninth Schedule of the Federal Constitution of Malaysia.

DAP Emperor Lim Kit Siang was against the introduction of Section 298A of the Penal Code of Malaysia.  In a Parliament debate on the 9th December 1982 on the Penal Code and Criminal Procedure Code (Amendment) Bill 1982 he said the following:

A Muslim found guilty of khalwat is usually fined $200 or $250 under the Muslim enactments of the various States. I have caused a check of the penalties for khalwat, offences in the various states, which vary from State to State but they all range from the lightest penalty of $100 or one month’s jail in Kelantan to the heaviest penalty of $1,000 or six months’ jail, as is to be found in Johore. However, the non-Muslim partner charged under the Penal Code Section 298A for khalwat activity which causes or attempts to cause or is likely to cause disharmony, disunity on feelings of ill-will would be exposed to an offence which is punishable with three years’ jail, or fine, or both.

This is most objectionable and unjust where for the same act, different persons are charged under different laws where one of them imposes much heavier penalties. Or is the Muslim partner in a khalwat charge going to be charged under the Penal Code in the Criminal courts? I am sure that the Shariah Courts in the various States would vehemently oppose this as a serious erosion of the jurisdiction and powers of the Shariah Courts.

So, in 1982 Lim Kit Siang opposed the introduction of Section 298A because a similar offence tried under the Syariah law would only provide for a much lesser sentence.  Why is he complaining now about Hadi wanting to introduce higher punishments for the same?  Wouldn’t it be fair for the non-Muslims?

As the purpose of the 2M government is to uphold the sanctity of Islam, defend true Islamic values and Muslim unity in the country so as to be able to deal with the problems of kafir mengafir, two imam issue, separate prayers and burials, in the Muslim community, the government should confine its legislative efforts to the Muslims only, and not draft a Bill with such far-reaching consequences in allowing for State interference in the practice, profession and propagation of non-Muslim faiths.

35 years later, he backtracks on the need for Muslims to make better its laws for the Muslims only. Which is why I say Lim Kit Siang is opposing for the sake of opposing so that the Muslims do not rally behind this bill months before the general election is due.

Hannah Yeoh, who is the Speaker of the Selangor State Assembly even allowed the Hudud motion to be brought into the assembly.  So why oppose the same motion when it is brought into Parliament? Why the double standard?

And why must Lim Guan Eng ask the BN components such as MCA, MIC and others to bear responsibility for the tabling of the RUU355?  Why don’t he ask his party’s Anthony Loke and Hannah Yeoh instead? They both supported Hudud and the tabling of Hudud in the Selangor State Assembly (as in the case of Hannah Yeoh).

Anthony Loke even went to town with his support for Hudud telling his Chinese audience not to be aafraid of Hudud:

Yet, the RUU355 is not even about Hudud. So, what is unconstitutional about the RUU355?

Only the objections by the vapid non-Muslims against the RUU355 is unconstitutional, as it is a right given to all religious groups, not just the Muslims, to manage its own affairs.  I don’t have to agree with the amendments proposed by the RUU355, but it is my religion and therefore it should be left to the Muslims to manage its own affairs – as guaranteed by the Federal Constitution.

And as for the atheists, just stay off my social media accounts. You don’t have the locus standi to participate in this debate. 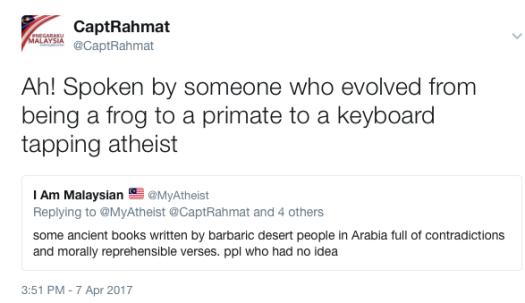 One Reply to “How The RUU355 Is Unconstitutional”