I have written on how racist Lim Kit Siang is in Part 1 dan Part 2 prior to this final part.

Lim Kit Siang is not only a racist, he was also against any attempt by the government to counter communist revolutionary ideology.

Kit Siang accused the Alliance government then of enrolling Malaysia into the World Anti-Communist League, an accusation denied by Khir Johari.

Question: why did Kit Siang slam the government even if it was true that Malaysia had joined the World Anti-Communist League?

Answer: the Opposition at that time was teemed with members and sympathisers of the Communist Party of Malaya.

A month before that, on 24 April 1969, an UMNO worker, Encik Kassim bin Omar, who was on his way home after the end of campaign hours for the day was stopped by Opposition supporters as he passed the Datuk Keramat section of Pulau Pinang and brutally murdered.  His face was smeared with red paint used to paint anti-government slogans by the Opposition supporters. This is among the reasons long campaign periods can be detrimental to public safety and order.

Since July 1968, that is a month after the commencement of the Second Malaysian Emergency (second armed uprising by the Communist Party of Malaya) that ended 21 years later, Kit Siang fired up racial hatred among the Opposition supporters.

Among the events of incitements that he did were:

What Kit Siang did not tell any of his audience is that even in government posts (except for the Malaysian Armed Forces), the percentage of non-Malays in the civil service far surpassed the number of Malays as evident in the excerpt from the National Operations Council’s (MAGERAN) White Paper below:

It is evident that Kit Siang’s racist and agitative character has never diminished till today.  The General Election was conducted on Saturday 10 May 1969.  The Alliance party (UMNO, MCA and MIC) won 66 seats, 23 lesser than in the 2nd General Election while the Opposition won 54.

At 5.30pm, 11 May 1969, DAP held a victory parade without police permit that comprised of five cars and 15 motorcycles that started from Brickfields towards Jalan Lornie (now Jalan Syed Putra).

When they passed in front of the Brickfields Police Station (now demolished), the mostly Chinese participants shouted:

“What can the police do? We are the rulers! Throw out all the Malay policemen!“

At 10pm on the same day, while parading in front of the Jalan Travers Police Station, they shouted:

“Death to the Malays! Sakai (derogatory term for aborigines) go back to the jungle!“

The same insults were hurled at policemen on duty when they again passed the Brickfields Police Station.

At the same time at Changkat Thamby Dollah near the old Pudu Jail (behind Berjaya Times Square), about 40 Opposition supporters shouted:

“Kuala Lumpur belongs to the Chinese!“

On the next day, Monday 12 May 1969, 500 scooters rode by Opposition supporters passed Jalan Ipoh, Jalan Parlimen, Jalan Gombak, Jalan Raja Laut before returning to Jalan Ipoh shouting at every Malay person they encounter:

“The Malays are now powerless. Now we are in control!“

When this convoy arrived at the threshold of Kampung Bahru, they shouted to the Malays:

“Malays get out! Why are you still here? We’ll beat you up! Now we are bigger (more powerful)!“

At night, more insults and abuses were hurled at Malay policemen on duty:

I did not make all the stuff above up.  You can read them in the MAGERAN report as per the images below: 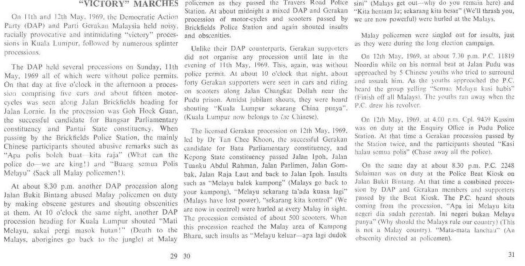 Where was Lim Kit Siang when abuses and insults were hurled at the Malays in Kuala Lumpur?

Lim Kit Siang on the morning of Tuesday 13 May 1969 was ready to flee to Kota Kinabalu so that he would not be in Kuala Lumpur if any untoward incident was to happen.

That is how racist and despicable Lim Kit Siang is as well as the DAP that he leads.  Almost 48 years have passed since 13 May 1969, Kit Siang is still attacking what he calls the ‘Malay’ government.  Back then, the Malays were united in protecting their rights that have been in existence way before the arrival of Lim Kit Siang’s ancestors – rights that have been agreed upon by representatives of all the Nation’s races and enshrined in the Federal Constitution.

Unfortunate for us now there are those who claim that they are Malays but forget easily.  Now this traitor and his worshippers stick a straw up Lim Kit Siang’s rear orifice and suck up to the DAP Supremo.